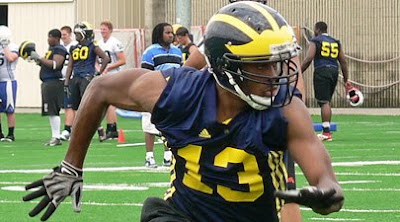 Strengths: Good size with plenty of room to add muscle mass . . . Plays downhill when opportunity arises . . . Careless with his body . . . High-effort player . . . Doesn’t go down easily with the ball . . . Seems to enjoy chasing plays down from behind . . . Good speed . . . Looks more agile and athletic than the highly recruited Gholston on film . . . Attacks blockers with leverage rather than trying to dance around them

Weaknesses: Not a fluid athlete . . . Lacks some agility in open space . . . Production is a bit questionable, since stats were amassed with two high FBS teammates alongside him in the front seven

Projection: He looks like a good weakside linebacker prospect. He could also project to tight end or rush linebacker, but I’d start him off at WILL. The biggest thing he seems to be lacking is bulk, but he could probably play in his second year.