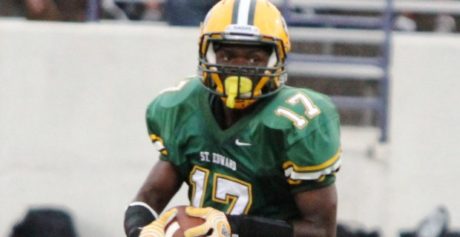 ADDED TO THE BOARD
Charlotte (NC) Catholic running back Elijah Hood decommitted from Notre Dame. He now appears to be headed to North Carolina or perhaps Alabama. He was high on Michigan before he selected the Fighting Irish, but the Wolverines do not appear to be re-entering the race.

Kyle Berger – LB – Cleveland (OH) St. Ignatius: Berger is a 6’3″, 205 lb. outside linebacker with offers from Michigan, Michigan State, Ohio State, Penn State, and Tennessee, among others.  Most analysts seem to think that Berger’s choice will come down to Michigan vs. Ohio State.  He attends the same high school – and is being recruited at the same position – as Michigan’s current starter at SAM linebacker, Jake Ryan.

Mason Cole – OG – Tarpon Springs (FL) East Lake: I did a scouting report on Cole a few weeks ago.  Michigan is one of his leaders (along with Notre Dame), if not the outright front-runner.


Michael Ferns III – LB – St. Clairsville (OH) St. Clairsville: Ferns committed to Michigan late in last year’s regular season, becoming the first member of the 2014 class.  He put together some “Team 135” T-shirts that he plans to hand out/send to each of the other players who commits to Michigan, and he’s combining with quarterback commit Wilton Speight to head up Michigan’s recruiting efforts for the class.


Drake Harris – WR – Grand Rapids (MI) Christian: Harris is a 6’4″, 180 lb. wideout with offers from Alabama, Florida, Michigan, Notre Dame, Ohio State, and Tennessee, among others.  He’s currently “committed” to Michigan State because he originally intended to play both basketball and football, but he will likely end up elsewhere because he has recently realized that football holds a better career future.


Elijah Hood – RB – Charlotte (NC) Catholic: Hood is a 6’0″, 205 lb. running back with offers from Clemson, Florida State, Michigan, North Carolina, Notre Dame, Ohio State, USC, and Virginia Tech, among others.  He will be visiting Michigan on Sunday right after a visit to Notre Dame, his current leader.  As a junior in 2012, he ran for 3,309 yards and 48 touchdowns on just 278 carries.  Hood is neck-and-neck with Joe Mixon for my most desired running back in the class of 2014.


Lawrence Marshall – DE – Southfield (MI) Southfield: Marshall is a 6’3″, 225 lb. defensive end with offers from Michigan, Michigan State, and Ohio State, and he was committed to Ohio State for a few days recently.  However, he followed that up with visits to the former two schools and decommitted.  As a sophomore in 2011, he had 79 tackles, 15 sacks, and 4 interceptions.

Malik McDowell – DE – Detroit (MI) Loyola: McDowell is a 6’7″, 290 lb. strongside defensive end with offers from Florida, Florida State, Michigan, Michigan State, Notre Dame, Ohio State, Oregon, USC, and others.  As a junior in 2012, he had 63 tackles, 15 sacks, and 1 forced fumble.  Michigan and Notre Dame appear to be the two front-runners.

ADDED TO THE BOARD: 2014
Norfolk (VA) Lake Taylor defensive tackle Nyquan Harris has earned a Michigan offer.  He’s a 6’3″, 285-pounder with offers from Alabama, Clemson, and NC State.  He’s a kid with a thick lower body who looks like a future nose tackle. (Highlights.)

Charlotte (NC) Catholic running back Elijah Hood has been offered by Michigan.  He’s a 6’0″, 212 lb. back with offers from Clemson, South Carolina, and Virginia Tech, among others.  As a junior this season, he has approximately 2,000 yards rushing and 33 touchdowns.  Hood has very good balance and decent speed; he definitely looks the part of a Brady Hoke-approved tailback.

MISCELLANEOUS
Last week I got around to linking recruiting profiles on the offer boards, so if you click on the names of the 2013 and 2014 commits on their respective offer boards, it will take you directly to their commitment posts; uncommitted prospects’ links will take you to their highlight videos.