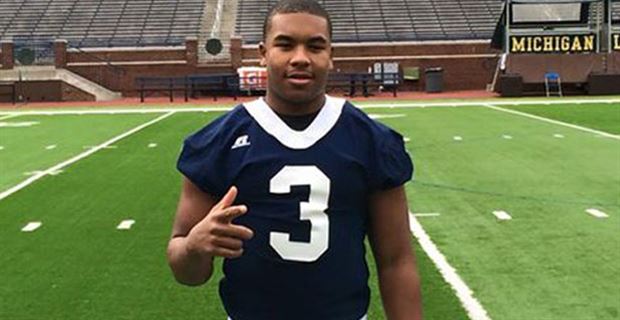 Farmington (MI) Farmington fullback David Reese committed to Michigan on Saturday morning. He was committed to Louisville since early March, and he also holds offers from Cincinnati, Indiana, Pitt, and a bunch of MAC programs.

Hit the jump for more on Reese and his commitment to Michigan.

Reese has visited Michigan numerous times over the past couple years, with an obvious eye toward earning an offer from the Wolverines. For a while, it did not seem as if an offer would come, at least not early in the recruiting cycle. With high school teammate Desmond Fitzpatrick committed to the Louisville Cardinals since last October, Reese followed suit. He committed on March 7, only to be offered by Michigan three weeks later. It took him about a week to pull the trigger on the flip. When he came to Michigan’s spring game on Saturday morning, he committed.

A linebacker to all the recruiting services – and seemingly in his heart – the Wolverines offered Reese as a fullback. That apparently caused some hesitation on his part, but head coach Jim Harbaugh has a history of playing guys both ways or moving them back and forth until they find a home. I am not a huge fan of Reese’s as a linebacker, because he looks like a two-down, 3-4 inside linebacker to me. However, he does a nice job at the fullback position. There aren’t many highlights of him blocking from his fullback spot, but he packs a nice punch as a defender, which should translate to offense. He’s built solidly and low to the ground, which should help him with leverage in his blocking. He also shows some pretty nifty feet with the ball in his hands and does a very good job of keeping his feet moving through contact in order to churn out some extra yardage. Reese looks pretty smooth catching a couple passes out of the backfield.

Reese does not have great speed, but that’s to be expected from a fullback. As a defender, there was a time when recruiting analysts thought he would end up as a defensive end because he was not particularly quick. While he has improved that aspect of his game from his sophomore to junior year, he still isn’t the most athletic linebacker around. His highlights should also be taken with a bit of a grain of salt, because Farmington plays against mediocre competition.

Overall, Reese is a good pickup as a fullback because Michigan loses two senior fullbacks (Joe Kerridge, Sione Houma) after the 2015 season. No other fullback on the roster has any game experience. He should be in the mix to play as a freshman, with competition coming from converted defensive tackle Brady Pallante and some walk-ons.

Michigan now has four commitments in the 2016 class, including two from the spring game weekend (quarterback Brandon Peters is the other). Reese is the first scholarship fullback for the Wolverines since Houma was recruited in the 2012 class. He is also the first Farmington High School recruit since kicker K.C. Lopata, who started his career as a walk-on in 2004. But it would not be surprising if Reese’s offered teammate, wide receiver Fitzpatrick, ends up a part of the class, too. As of right now, the 2016 class is scheduled to be 15 players strong.