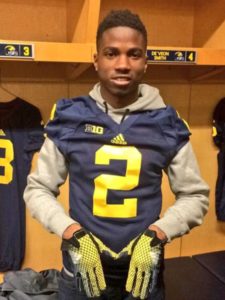 Gardena (CA) Junipero Serra wide receiver Deontay Burnett committed to Michigan on Sunday. He had been committed to Washington State until that point, and he also had offers from Arizona State, Miami, and Utah, among others. UPDATE: Burnett denies that he committed to Michigan, and it’s unclear whether he’s denying it because someone jumped the gun or because he truly has not committed.

Burnett was a Washington State commit since July of 2014, but an offer last week came from the Wolverines, and he set the official visit to Michigan. Once on campus, he realized that it was an opportunity he couldn’t pass up. Despite possibly playing for a pass-happy offense at Washington State, the visibility of playing at Michigan is difficult to match.

Immediately when I saw Burnett’s film last week, I thought he could be a solid pickup at this juncture. Burnett has decent speed, but his most impressive quality is the ability to go get the ball, whether it’s high or low. He consistently outjumps defensive backs and has a knack for using his hands to come down with the ball. He runs pretty good – not great – routes and seems to understand coverages, locations of defenders, etc. Burnett has a little bit of wiggle to him, although probably not enough burst to be a consistent gamebreaker.

Obviously, he is very light and needs to add weight. He’ll have to be able to block well to get onto the field, so that may be a year or two away. I also think Burnett could run crisper routes, and some added muscle might help him with his acceleration and speed. As for his lack of outstanding production, he actually led the team in receiving – despite the presence of Stanley, who also plays defense – and Junipero Serra runs the ball pretty well. Their dual-threat quarterback (2016 four-star Khalil Tate) rushed for almost 1,300 yards, three other players rushed for more than 400 yards, and eight players had more than 100 yards receiving on the season, which means they spread the ball out quite a bit.

Overall, Burnett has a little bit of a Drew Dileo vibe to me. He’s not a true burner who can take the top off a defense regularly, but he has enough quickness to surprise someone once in a while. He’s also the type of guy who can catch the ball underneath and wriggle his way into a first down. With Michigan’s current recruiting situation, they might not be able to find a true gamebreaker, but this is a solid choice so late in the game.

Burnett’s high school produces a lot of high-quality talent. In the 2015 class alone, they have two Rivals 5-stars in linebacker John Houston and defensive end Rasheem Green. They also have a 4-star, Stanley Norman, who was an Army All-American and is headed to Arizona State. Last year Serra produced two guys Michigan was recruiting hard, wide receiver/cornerback Adoree Jackson (USC) and Dwight Williams (UCLA). And for the 2016 class, they already have three 4-stars and two 3-stars ranked by Rivals. If Michigan can get and keep their foot in the door, this could turn into a productive relationship with the school.