In somewhat disappointing news for Michigan, it was announced yesterday that Michigan safeties coach Greg Jackson would become the new Dallas Cowboys safeties coach. Jackson spent just one year in Ann Arbor after coaching for the San Francisco 49ers from 2011-2014.

Hit the jump for more on Jackson’s departure.

END_OF_DOCUMENT_TOKEN_TO_BE_REPLACED 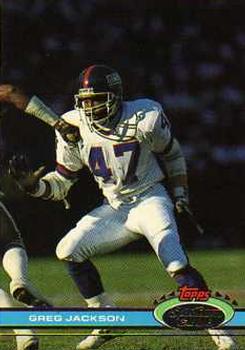 San Francisco 49ers defensive backs coach has reportedly taken the secondary job at Michigan, where he will at least replace safeties coach Curt Mallory (gone to Wyoming) and perhaps displace cornerbacks coach Roy Manning (whose fate is unknown at this point).

Jackson was a First Team All-American as a safety at LSU in 1988, making 7 interceptions and totaling 219 yards, an average of over 31 yards/return. He became a 3rd round draft pick by the New York Giants and played twelve seasons with the Giants, Philadelphia Eagles, New Orleans Saints, and San Diego Chargers. He totaled 32 interceptions (twice reaching 6 picks in a season) and returned 2 of those for touchdowns.

Jackson has spent most of his coaching career working with defensive backs, and occasionally linebackers and special teams. He started at Idaho and bounced to Louisiana-Monroe, Tulane, and Wisconsin before joining Jim Harbaugh in San Francisco for the 2011 season, where he spent the last four years. With the 49ers he helped to coach some of the best secondaries in the NFL, and he helped safeties Dashon Goldson (twice), Eric Reid, and Donte Whitner get to the Pro Bowl, along with cornerback Carlos Rogers. The 2011 secondary group grabbed 22 interceptions, which was the #2 total in the NFL; both Goldson and Rogers notched 6 picks each that year.

This is a very solid hire for Michigan. Jackson has played and coached in the south, where he could help Michigan recruit. He has already reportedly contacted Louisiana DE Jalen Bates, an Arizona State commit and the cousin of former Michigan linebacker Jonas Mouton. Furthermore, he has the accolades (All-American, NFL draft pick, long NFL career, NFL coaching success) to back up what he says on the practice field, in the meeting rooms, and on the recruiting trail.

On Michigan’s end, the Wolverines can use all the help they can get. While their overall defensive numbers were decent, the safety play left a lot to be desired, and cornerback Jourdan Lewis (2 interceptions) was the only defensive back to make an interception in all of 2014. Michigan has a lot of talent in the defensive backfield if recruiting rankings are to be trusted, but they were unable to put it together last year. This is a secondary that could be composed of all 5- and 4-stars for the 2015 season opener.

The hiring of Jackson leaves some doubt about Manning, who coached cornerbacks last year. Defensive coordinator D.J. Durkin has been announced as the linebackers coach, and former defensive coordinator Greg Mattison is expected to stay on, presumably as the defensive line coach. Manning does have some experience coaching a couple positions on offense, but spots are starting to dwindle. Manning has not proven to be a great coach, but he has been a very good recruiter.