Consider helping out the blog by making your Amazon purchases through these here links (LINK):

The BBQ at the Big House will take place on July 27. With so many 2020 commitments right now, this probably won’t be a big weekend for the current class, but more for the rising juniors in the 2021 class. 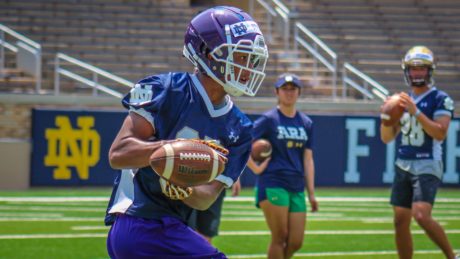 It’s been a while since I’ve done a recruiting update on the 2021 class. That’s because they’re over two years away from signing. But now it’s time to catch up on everything we’ve missed. These aren’t necessarily “new” offers, but nobody else is doing recruiting updates on 2021 prospects, so you probably haven’t heard of many of these players.

Christian Abraham – CB – Paramus (NJ) Catholic: Abraham is a 5’11”, 195 lb. prospect with an offer from Rutgers. That’s the alma mater of Jabrill Peppers, Rashan Gary, and Drew Singleton, though the former two are gone to the NFL, and Singleton announced he would transfer. Michigan does still have safeties coach Chris Partridge, who was the head coach at Paramus.

Hit the jump for a bunch of other offers.