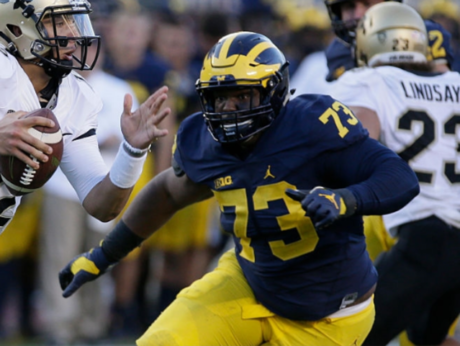 The first round of the 2018 NFL Draft will be taking place on Thursday evening, April 26. I don’t know about you, but this is one of the top few biggest sporting events of the year for me.

There aren’t many players leaving from a young Michigan team, so this is a much shorter list than it was in 2017. I posted their Pro Day results back in March (LINK). Here’s a look at the prospective NFLers from the Maize and Blue:

END_OF_DOCUMENT_TOKEN_TO_BE_REPLACED 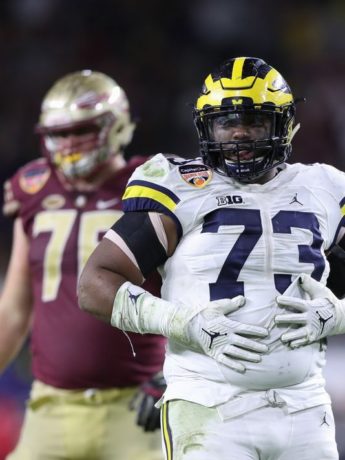 Michigan’s Pro Day took place on Friday, March 23. Here are the results of the video, including a wrap-up video from Michigan.

Get the full report from this morning’s Pro Day workouts thanks to Michigan Sports Television. #ProBlue pic.twitter.com/rZBx7Wfey1 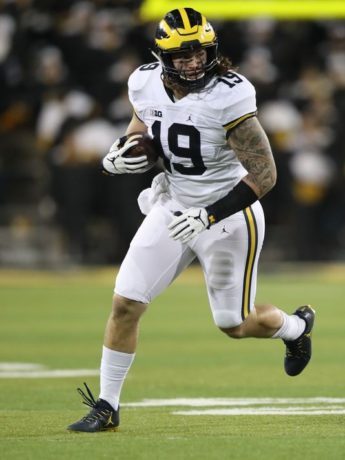 Poggi committed to Michigan in January of 2012 as a part of the 2013 class (LINK). I gave him a final TTB Rating of 79 (LINK). He played defensive tackle at Baltimore (MD) Gilman, where the head coach was his father, Biff. The elder Poggi liked Michigan’s coaching staff at the time (Brady Hoke and Co.), and he eventually came to work at Michigan as a staffer under Jim Harbaugh before returning to coach Baltimore (MD) St. Frances. The younger Poggi was an Under Armour All-American at defensive tackle, and he fended off advances from Alabama late in the recruiting process to stick with his Michigan pledge. Ironically, Alabama wanted him as an H-back, and Michigan fans thought that was funny because he was a defensive lineman all the way. And then . . .

Poggi redshirted in 2013, as expected. As a backup defensive tackle in 2014, he made 2 tackles. Then Hoke was fired, and in came Jim Harbaugh, who flipped Poggi to H-back. He started four games during the 2015 season, making 1 catch for 2 yards and generally struggling as a blocker. However, his blocking improved in subsequent seasons. He had 1 carry for 4 yards and 6 catches for 45 yards in 2016. And in his final year, he had a 2-yard touchdown run against Maryland, his home-state team, and he caught 2 passes for 21 yards on the year.

Poggi’s career was somewhat unexceptional, especially when looking back and seeing that he was an Under Armour All-American and recruited hard by Alabama. One would expect that a high school All-American would turn into a high-quality player in college, and that never seemed to be the case. He was a little-used backup defensive lineman early in his career, and Jim Harbaugh needed a big, bruising fullback to run his offense when he arrived in 2015. If he had stayed on the defensive line, there’s a good chance that he would have turned out to be a good defensive player, because that’s what Greg Mattison does with defensive linemen. He never seemed to fit the mold of a true fullback for Michigan, though, at 6’4″ and 257 lbs. Early in his career, he had difficulty identifying which defender to block and trouble with the technique of getting the job done. And while that eventually improved, he was never a dual-threat guy to hurt teams with the ball in his hands. Fellow position-switcher Khalid Hill always seemed more effective, and Poggi took playing time away from Hill. And looking at it from Poggi’s perspective, I wonder if Michigan really handcuffed his chances of getting to the NFL by moving him to offense.

. . . being an awkward fit at fullback. I’m down with occasionally moving a guy like William Carr or Refrigerator Perry to running back/fullback on the goal line, but playing a 6’4″, 257 lb. defensive lineman at fullback for three years seems like an odd move. Poggi played fine and it’s not really a knock on him, but it’s just a rarity in college football.

As I mentioned above, I wonder if the move to fullback was a death knell for his opportunity at an NFL career. NFL teams generally keep approximately one fullback on the roster, and they are also rarely of the 6’4″, 257 lb. variety. Poggi has very little experience blocking as an in-line tight end, and he probably doesn’t have the athleticism to be an NFL H-back. While there was a lot of competition for playing time on the defensive line at Michigan, that would have fit his body type better, and he would have received the full Greg Mattison Effect that has sent the likes of Ryan Glasgow, Willie Henry, and others (who were higher rated) on to NFL careers. I don’t see Poggi getting drafted, and I don’t really envision him having a long career as a free agent. 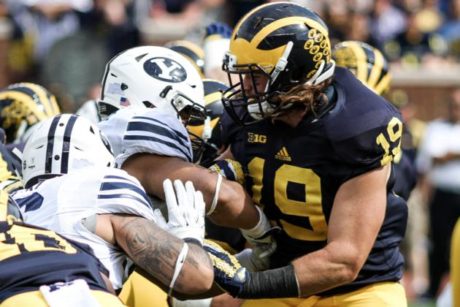 Poggi split fullback time with Khalid Hill in 2016. Poggi was treated as the big, bruising blocker who could kick out defensive ends and trap defensive tackles, while Hill was the guy who would lead on toss sweeps and grab short-yardage carries. I thought Hill played better than Poggi, but somehow the coaching staff still started for half of the season.

Despite Poggi not being an offensive skill weapon, I think he has value to the team because he’s big enough and strong enough to be an effective blocker against bigs. Michigan uses multiple tight ends and sometimes multiple fullbacks at once, and Poggi and Hill are the only two guys ready for that spot this year. The next guy is probably freshman Ben Mason, and after that it drops off to small-ish walk-ons. If Michigan didn’t play Hill ahead of Poggi last year full-time, then I don’t see why that would change going into 2017. I expect another low-key season for Poggi, but he should be a battering ram in the power running game.