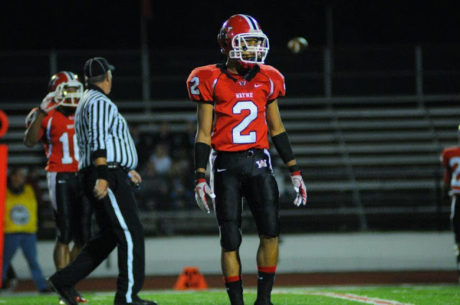 Huber Heights (OH) Wayne safety Tyree Kinnel committed to Michigan on Saturday. He chose the Wolverines over offers from Arkansas and Kentucky.

Kinnel had openly wanted a Michigan offer, but it was a while in the making. He earned his offers from Arkansas and Kentucky this spring, the latter from a program that is making serious inroads with good prospects in the state of Ohio. Kinnel camped at Michigan and Ohio State over the summer, but he left Michigan’s camp without an offer and publicly stated his frustration with the situation. A little over a month afterward, the coaches extended an offer. He thought about it for a few weeks, returned to campus on Saturday for a visit, and committed to the coaches.

Kinnel shows pretty good instincts and playmaking ability in the passing game. He plays free safety for his high school team, so he should be comfortable playing in deep coverage once he gets to college. He shows a nice, smooth backpedal. He’s able to go up and get the ball at its highest point, and he shows solid recovery speed. Kinnel takes good angles to the football and appears to be cognizant of not allowing big plays.

While listed at 6’0″ and 190, Kinnel does not look close to that size on video; he looks 5’10” or perhaps 5’11” and 170-175 lbs. There’s a chance that he has grown since his sophomore season, but if not, he looks rather slight. I mentioned the good angles, but Kinnel isn’t the most physical tackler once he arrives at the point of attack. He doesn’t arrive with much authority and tries to swing guys to the ground rather than driving his feet through the tackle.

I have not looked at the 2015 class as thoroughly yet as the 2014 kids (for obvious reasons), but I have a hard time believing that Kinnel would be the top safety on Michigan’s board; yet he’s the only one Michigan has offered up to this point. While he has the ability to be solid in a Thomas Gordon type of way, he does not look like a potential star. His speed is adequate, but his size and tackling are both a little questionable for me. All that being said, he’s only about to start his junior year, so improvements in both areas could be forthcoming. This is a good prospect, but Michigan has generally been recruiting elite prospects, especially early.

This is Michigan’s sixth commitment for the class of 2015 and the second defensive back, joining Cleveland (OH) St. Edward cornerback Shaun Crawford, who committed a day earlier. The last Wayne High School prospects to commit to Michigan were brothers Terry and Terrence Talbott, a defensive tackle and cornerback from the 2010 class, respectively; both left the program before contributing much. Michigan also recruited Wayne product Braxton Miller, now the starting quarterback for Ohio State.

TTB Rating: I will not assign ratings for 2015 prospects until the 2014 class wraps.