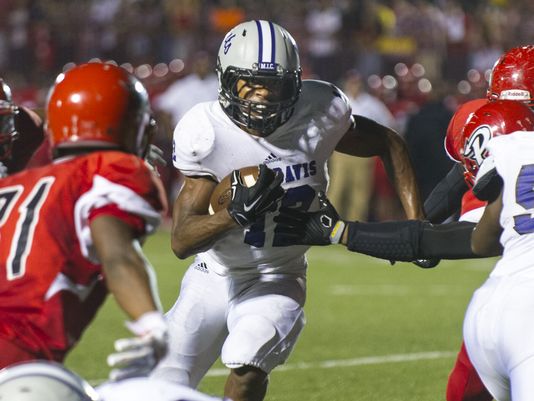 Indianapolis (IN) Ben Davis slot receiver Chris Evans committed to Michigan on Saturday. He chose the Wolverines over offers from Cincinnati, Illinois, Indiana, Michigan State, Minnesota, and Purdue, among others.

Evans was vaguely on my radar until he planned a visit to Michigan and was offered at the end of May. He expected to receiver by the time the visit was finished, and it happened. The Wolverines immediately jumped to the front of his middling offer list, and in short order, he set an announcement date for June 6. Despite his coach saying that Evans would take more visits this summer before deciding, Evans went ahead with his announcement as planned.

When Michigan first extended an offer, I was a little bit confused since they seemed to be on the verge of pulling in Kiante Enis to add to the other two running backs already committed in the 2016 class. Evans has the skills of a wide receiver or slot receiver, but not so much those of a running back. He catches the ball very smoothly and does not fight it on its way in. He looks like a natural pass catcher, using his hands, keeping his stride, etc. He can also be dynamic in open space, using his speed and some decent lateral movement to gain extra yardage. I also like the way Evans scores, which is by acting as if he’s crossing the finish line at a track meet.

Evans’s highlights do not show much of him running inside or through contact, which suggests that at 5’11” and 186 lbs., he’s just not equipped to do that very often. The offense appears to be designed to hit the defense up the middle on some quick stuff and then get him on the edge whenever they can.

I like Evans as a slot receiver, and I could even see his skills translating to cornerback or return man. I don’t think he has the physicality to be a running back or safety. The more I have watched of him, the more I like him. He just seems to be a good all-around player who can plug in at multiple spots, and at the very least, I am confident that he can be a solid slot guy. Michigan reportedly recruited him as an athlete with an eye toward playing him at slot receiver.

Evans is Michigan’s ninth commitment in the 2016 class, and he’s the third from the Hoosier State, joining Enis and quarterback Brandon Peters. It’s the first time in the Rivals era that Michigan has received commitments from three Indianans in one recruiting cycle, and it’s only June. Ben Davis High School is one of the more productive programs in Indiana, recently producing 2015 linebacker Asmar Bilal (Notre Dame), 2014 safety Antonio Allen (Indiana), 2010 safety Isaiah Lewis (Michigan State), and a host of MAC players; however, Evans would be the first player from Ben Davis to play at Michigan.