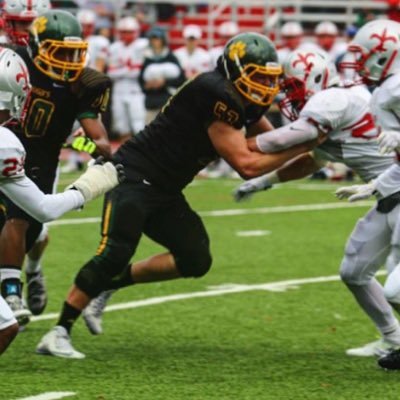 If you haven’t done so already, consider getting a Gravatar (LINK). It lets you pick an avatar that can be used on virtually any WordPress site, so you’ll have a picture to go along with your username.

Ellenwood (GA) Cedar Grove linebacker Dennis Bell was offered by Michigan. He’s a 6’2″, 217 lb. prospect with offers from Georgia State, Maryland, Miami-OH, and Wake Forest. Information is limited on Bell, who’s a 2-star recruit on Rivals, but I believe he transferred from Decatur (GA) Decatur to Cedar Grove after his junior season. So that would mean he wasn’t technically a teammate of incoming Michigan freshman Elysee Mbem-Bosse. Regardless, Bell is now teammates with several Michigan targets in the 2017, 2018, and 2019 classes, and he camped at Michigan early last week, earning the offer in front of the coaching staff. He’s a big WR/DB who will probably outgrow the defensive back position and turn into a linebacker at the next level. He said that he thought about committing to Michigan immediately, but now he’s going to hold off on committing until later in the summer.

Charlotte (NC) Hough quarterback Jackson Gibbs was offered by Michigan. He’s a 6’1″, 185 lb. prospect with no other offers at this time. Gibbs also camped at Michigan and earned the offer, although there has been much speculation and discussion about whether he has anything close to a committable offer. Recruiting guys have dug into it and say that he wasn’t technically offered, but as long as Rivals lists him with one, then I will, too. I’m not in the business of verifying offers. Anyway, Gibbs is a decent looking prospect, but probably not on Michigan’s level. He’s the grandson of former Redskins head coach Joe Gibbs.

Richmond (VA) Collegiate offensive guard Jess Speight was offered by Michigan. He’s a 6’4″, 275 lb. prospect with no other offers at this time. Speight is the brother of Michigan quarterback Wilton Speight. While I’m typically not a fan of under-the-radar offers quite this early in the process, I actually like Speight a little bit. His size is a question mark for me because I don’t know if he matches his listed measurements, but he shows some good athleticism and technique. I wonder if he might be more of a target for the center position.

Hit the jump for several guys who committed elsewhere, some top lists, and some random bits.