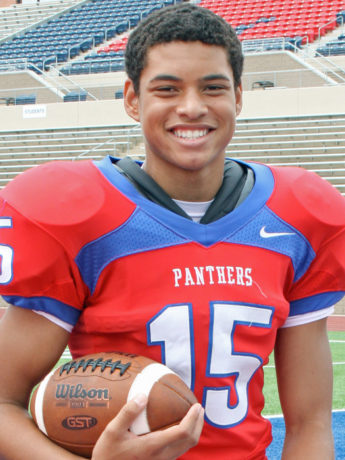 ADDED TO THE BOARD: 2015
Avon (CT) Old Farms tight end Chris Clark decommitted from North Carolina. When Clark committed to the Tarheels, he said he would stop taking visits . . . and he did for about, oh, two weeks. Then he visited Notre Dame, and he’ll be visiting Michigan and Ohio State this week. In a world where college commitments last for shorter periods of time than romantic relationships, never trust it until the National Letter of Intent rolls in on the old fax machine. Currently, prognosticators are putting Notre Dame in the lead, as if that means anything.

Waco (TX) Midway safety Kahlil Haughton was offered by Michigan. Haughton is a 6’2″, 175 lb. prospect with offers from Arkansas, Baylor, LSU, Nebraska, Oklahoma, Oklahoma State, TCU, and Texas Tech, among others. He’s a 247 Composite 3-star, the #41 safety, and the #636 player overall. As a junior in 2013, he had 87 tackles and 2 interceptions. Haughton looks like a free safety, but he does not bring his feet when he tackles and does not wrap up well. He appears to be a bit of a reach at this point. Baylor appears to be the leader right now.

OFF THE BOARD
Tampa (FL) Plant offensive tackle Jake Fruhmorgen committed to Clemson. He visited Michigan a couple weekends ago and enjoyed his visit, but it wasn’t enough to sway him away from his previously scheduled announcement date. According to reports, Florida was #2 on his list and Michigan was third. Clemson had previously secured a commitment from 2015 offensive tackle Mitch Hyatt, who also holds an offer from Michigan. 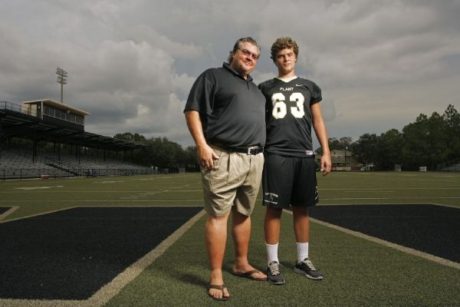 2015
Jake Fruhmorgen – OT – Tampa (FL) Plant: Fruhmorgen is a 6’5″, 280 lb. prospect with offers from Alabama, Auburn, Clemson, Florida, Florida State, Miami, Notre Dame, and Ohio State, among others. He’s a 247 Composite 4-star, the #7 offensive tackle, #74 overall, and #14 in the state of Florida. He claims a 5.4 forty. Fruhmorgen’s father went to Alabama, but Jake is expected to pick soon, and the signs are pointing toward Clemson as the likely destination. Michigan has pursued other prospects from Plant in recent years, including offensive lineman Tony Posada (who signed with Michigan but quit football before his freshman year even began) and running back James Wilder, Jr. (Florida State).

2016
Stefan Claiborne – S – Clinton Township (MI) Chippewa Valley: Claiborne is a 6’1″, 168 lb. prospect with no offers at this time. He could play wide receiver, cornerback, or safety at the next level and will probably be one of the top ten prospects in the state for 2016. He claims a 4.5 forty, a 30″ vertical, a 225 lb. bench, and a 365 lb. squat, which are all pretty good numbers for someone his size and age.

Rex Culpepper – QB – Tampa (FL) Plant: Culpepper is a 6’3″, 210 lb. prospect with no offers at this time. He’s the teammate of Fruhmorgen. He is the son of former Chicago Bears, Tampa Bay Buccaneers, and Minnesota Vikings defensive tackle Brad Culpepper, who played college football at Florida.

Steven Frank – QB – Oswego (IL) Oswego: Frank is a 6’4″, 190 lb. prospect with no offers right now. As a sophomore in 2013, he had 1,952 passing yards and 27 passing touchdowns, along with 5 rushing scores. He claims a 4.7 forty but is definitely a pro-style guy, but he looks like a guy who will have a number of quality offers by the time all is said and done. 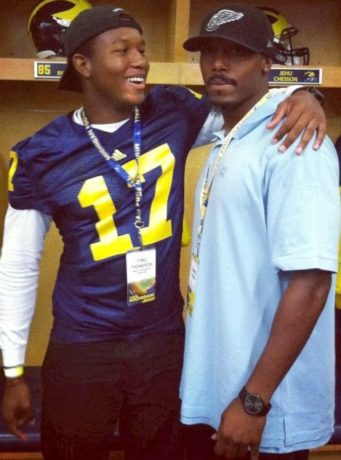 ADDED TO THE BOARD: 2014
Sarasota (FL) Booker running back Marlon Mack (offense, defense) was offered by Michigan. Mack is a 6’0″, 195 lb. prospect with offers from Indiana, Louisville, South Florida, and UCLA, among others; he was committed to the Bruins until a few days ago. He’s a 247 Composite 3-star, the #98 athlete, and the #1,117 player overall. Mack claims a 4.5 forty and shows the speed on film, but he’s not a polished running back and more of an athlete who runs the ball. The reason I linked his offensive and defensive highlights separately above is that he has a chance to play safety or maybe even corner in college, and I would lean toward him having higher upside at safety. He has good range and is a very physical hitter from the defensive back position. However, he appears to prefer running back, and that’s the position where Michigan is recruiting him at this time. The Wolverines are also in hot pursuit of Minneapolis (MN) Washburn running back Jeff Jones, and while signs are positive for Jones to Michigan, Mack decommitted from UCLA as soon as he was offered by Michigan assistant coach Jeff Hecklinski. Both running backs are planning January 31st official visits to Ann Arbor, so it will be a very interesting race to see who commits first. I believe Michigan will get at least one of the two, but Mack’s versatility could mean that he has a spot whether Jones commits or not.

ADDED TO THE BOARD: 2015
Tampa (FL) Plant offensive tackle Jake Fruhmorgen was offered by Michigan. Fruhmorgen is a 6’5″, 280 lb. prospect with offers from Alabama, Auburn, Clemson, Florida, Florida State, Georgia, Miami, Notre Dame, Ohio State, Penn State, South Carolina, and Wisconsin, along with lots of others. He’s a 247 Composite 4-star, the #6 offensive tackle, and #75 overall, and he’s already committed to playing in the 2015 Under Armour All-American Game. Fruhmorgen has the feet to play tackle at the next level, but really, I think he could play either guard or tackle position. His father John was an offensive tackle at Alabama in the late 1980’s and went on to play professionally, most notably for the Miami Dolphins.

Memphis (TN) Whitehaven linebacker Joshua McMillon was offered by Michigan. McMillon is a 6’3″, 230 lb. prospect with offers from Alabama, Auburn, Clemson, Georgia, Ole Miss, and Tennessee, among others. He’s a 247 Composite 4-star, the #13 outside linebacker, and #186 overall. McMillon is being recruited as a SAM linebacker by the Wolverines, but he looks like a guy who might be more likely to end up at weakside end in the future. On the plus side for Michigan, his head coach is a Michigan graduate and he’s interested in early playing time, which could work out for him with starter Jake Ryan graduating after 2014 and no heir apparent. On the negative side, McMillon has stated that his “dream school” is Alabama.

Detroit (MI) King linebacker Tyriq Thompson was offered by Michigan on Thursday. Thompson is a 6’2″, 210 lb. prospect with offers from Michigan State, North Carolina State, Northwestern, and Wisconsin, among others. He’s a 247 Composite 3-star, the #23 outside linebacker, and the #448 player overall. As a junior in 2013, he had 142 tackles, 10 sacks, 7 pass breakups, and 4 forced fumbles. Thompson moved from Missouri to Michigan prior to the 2013 season. His stature and stance make him look a little like James Ross, but Thompson plays a little slower. Michigan State was presumed to be the leader until Michigan offered, so this new development makes things interesting. Thompson’s father Clarence was a safety at Michigan in the mid-’90s, when he made 154 tackles, 7 interceptions, 11 pass breakups, 4 fumble recoveries, and 1 forced fumble from 1993-1995.

OFF THE BOARD
Baltimore (MD) Gilman cornerback Troy Vincent, Jr. flipped from Penn State to North Carolina State. Obviously, he’s the son of Troy Vincent, whom you may or may not remember as a Wisconsin Badger, Miami Dolphin, and Philadelphia Eagle. Michigan seems set at cornerback, and there was some question about how heavily the Wolverines pursued him in the first place.

MISCELLANEOUS
The recruiting sites all updated their final rankings for the 2014 class:

I took a look at the history of #1 rated cornerbacks in the Rivals era.