McCurry has been on the fringe of significant playing time for the past couple seasons. He caught a couple passes back in 2018 – and even garnered an ill-advised crunch-time target in The Game – but the 2019 season saw him relegated to special teams almost exclusively. New offensive coordinator Josh Gattis and a new class of recruits seemed to push McCurry to afterthought status when it comes to offense.

I expect more of the same in 2020 with a class of speedy recruits joining the team. Even though Donovan Peoples-Jones and Tarik Black have departed since last season, incoming players like Roman Wilson and A.J. Henning should gobble up some snaps. Meanwhile, second-year players Mike Sainristil and Giles Jackson should be more ready to play. So it looks like another year of special teaming for McCurry.

On September 25, 2010, Michigan fullback John McColgan caught a pass from quarterback Tate Forcier that put the Wolverines up 36-14 over Bowling Green State University.

And until September 8, 2018, against Western Michigan University, no other Michigan walk-on caught a touchdown pass until Jake McCurry did when he scurried into the endzone from 18 yards away.

McCurry didn’t exactly burst onto the scene in 2018, but he did come out of nowhere. A nondescript preferred walk-on in 2017, he won the Scout Team Player of the Year as a true freshman and found his way onto the field in some key moments in 2018. Not just for the touchdown against the Broncos, but for a much maligned slot fade target against Ohio State. While that slot fade target did not work out well (it fell incomplete but should have been flagged for defensive pass interference), it did indicate how much confidence the coaching staff was placing in McCurry.

This season McCurry is not going to be a target hog, but he has shown that he can contribute effectively on special teams. And on certain occasions, Shea Patterson (or others) will probably try to get him the ball through the air. McCurry is someone who can fill in the cracks and do some dirty work on special teams, and those guys are valuable.

And maybe there won’t be another eight-year window between walk-on touchdown receptions. 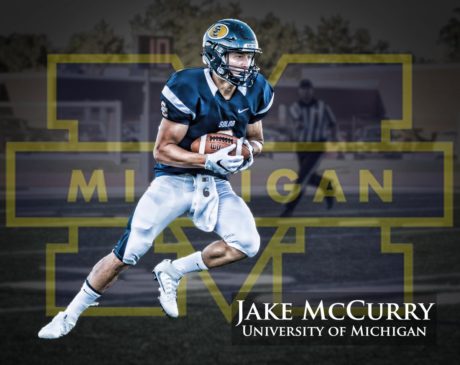 
McCurry is a bit of a mystery since we didn’t have an opportunity to see Michigan play the spring game, but I heard some hype about him in the off-season. Hype about skill players at this level is rare since there’s so much talent at wide receiver, cornerback, etc., and even then it must be taken with a grain of salt. It wasn’t too long ago that Nate Schoenle earned a fair amount of attention, and while he has parlayed that into a decent chunk of playing time, it has almost exclusively been as a blocker, not a pass receiver (4 catches, 41 yards for his career). What are the chances that Michigan has playing time for two walk-on receivers with all the ballyhooed recruits on the roster? Probably very slim.