Jaiden Ausberry – LB – Baton Rouge (LA) University Laboratory: Ausberry is a 6’2″, 210 lb. prospect with offers from Alabama, Georgia, LSU, Michigan, Notre Dame, Ohio State, and Texas, among others. He has taken officials to Auburn, Notre Dame, and Texas A&M. Ausberry ranks as a 4-star, the #4 outside linebacker, and #80 overall. The FutureCast has him headed to LSU, but his older brother Austin signed with Auburn in the class of 2022.

Jalen Brown – WR – Miami (FL) Gulliver Prep: Brown is a 6’2″, 178-pounder with offers from Georgia, LSU, Miami, and Michigan, among others. He’s a 4-star, the #6 wide receiver, and #44 overall. Brown has a connection to former Michigan great Desmond Howard, but he also has connections elsewhere. LSU and Miami are also considered to be strong contenders for his services.

Malachi Coleman – DE – Lincoln (NE) East: Coleman is a 6’5″, 196 lb. athlete with offers from Georgia, Michigan, Oklahoma, and Oregon, among others. He’s a 4-star, the #2 athlete, and #96 overall. Coleman took an official visit to Nebraska earlier this month and the FutureCast has him as a future Cornhusker.

Lander Barton – LB – Salt Lake City (UT) Brighton: Barton is a 6’4″, 215 lb. prospect with offers from Michigan, Texas, and Utah, among others. He’s a 4-star, the #21 linebacker, and #187 overall. Numerous family members went to Utah, so he will be a tough pull from the Utes. This is an official visit.

Joshua Conerly – OT – Seattle (WA) Rainier: Conerly is a 6’5″, 275-pounder with offers from Alabama, Michigan, Oklahoma, Oregon, and Texas, among others. He’s a 5-star, the #3 offensive tackle, and #20 overall. This is an official visit.

Ja’Kobi Albert – CB – Fairfield (AL) Fairfield Prep: Albert is a 6’0″, 175 lb. prospect with offers from Auburn, Georgia, Michigan, and Penn State, among others. He’s a 3-star, the #23 athlete, and #363 overall. I think his best fit might be at safety, but even though he’s already a borderline 4-star prospect, I think he’s underrated. This is an official visit.

Darrius Clemons – WR – Portland (OR) Westview: Clemons is a 6’3″, 205 lb. prospect with offers from Auburn, Michigan, Notre Dame, and Penn State, among others. He’s a 4-star, the #20 wide receiver, and #151 overall. He’s a little bit stiff in his movements, but he could be a good outside receiver to take the top off the defense. This is an official visit. UPDATE: Clemons has canceled his visit.

Jahlil Florence – CB – San Diego (CA) Lincoln: Florence is a 6’1″, 180 lb. prospect with offers from Arizona, Michigan, and Syracuse, among others. He’s a 3-star, the #37 cornerback, and #386 overall. This is an official visit that was supposed to happen two weeks prior, but it was postponed.

I haven’t posted one of these updates in a while because, well, not a whole lot has been going on in the recruiting world. So here’s an update that covers the last month and a half.

ADDED TO THE BOARD: 2015
Belmont (NC) South Point linebacker Tanner Muse was offered by Michigan. He’s a 6’3″, 207 lb. prospect with offers from Clemson, Michigan, North Carolina, North Carolina State, Northwestern, and Virginia, among others. He looks like he could play either SAM or MIKE for the Wolverines if he commits down the road. He’s a very athletic kid who has plenty of room to fill out.

Philadelphia (PA) St. Joseph’s Prep cornerback John Reid was offered by Michigan. He’s a 5’10”, 170 lb. prospect with offers from Arizona, Miami, Michigan State, Penn State, Rutgers, and West Virginia, among others. 247 Sports’ Composite ranking places him as a 4-star, the #9 cornerback, and the #93 player overall. Reid is the teammate of offensive tackle commit Jon Runyan, Jr.

OFF THE BOARD
Phoenix (AZ) Mountain Pointe wide receiver Jalen Brown committed to Oregon on October 7. Brown visited Michigan over the summer, but Michigan’s coaches kind of slow-played him and didn’t give him the red carpet treatment. He left Ann Arbor feeling like they had other guys ahead of him on their list, so there was never really a shot of him committing to the Wolverines. He was the Gatorade Player of the Year in Arizona during his junior season.

Tampa (FL) Jefferson linebacker Juwuan Brown committed to South Florida all the way back in July, but it slipped past me. It’s unclear whether he actually had an offer from Michigan at any time, but he wanted to stay close to home, anyway.

Fort Lauderdale (FL) American Heritage wide receiver Isaiah McKenzie committed to Notre Dame on October 19. Or he didn’t. There are mixed reports. Either way, he’s expected to commit to Notre Dame if he hasn’t already.

El Cerrito (CA) El Cerrito cornerback Adarius Pickett committed to UCLA on September 3. 247 Sports’ prognosticators picked him 100% for USC, but that didn’t pan out so well. He never showed much interest in his Michigan offer.

Jacksonville (FL) Raines cornerback Lamont Simmons committed to Rutgers. Simmons stayed off the radar and is the country’s #967 player overall, according to 247’s Composite ranking.

Englewood (NJ) Dwight Morrow wide receiver Juwann Winfree committed to Maryland on September 27. Winfree mentioned several times that he had high interest in Michigan, but a visit never transpired. On a side note, Dwight Morrow was an American ambassador to Mexico during the Coolidge administration. You’re welcome. 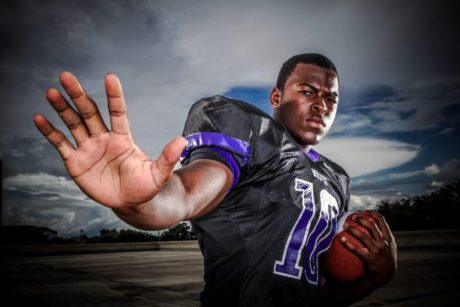 With school ending at various times around the country, visits won’t really be limited to being on the weekends. These are a few players who have visited in the last couple days or will visit in the next week.

Kalen Ballage – RB – Peyton (CO) Falcon: I wrote up a scouting report on Ballage last week. UPDATE: Ballage canceled his visit due to the wildfires taking place in Colorado.

Dre Brown – RB – DeKalb (IL) DeKalb: Brown is a 5’11”, 190 lb. prospect for 2015 with offers from Illinois and Northern Illinois. As a sophomore in 2012, he had 108 carries for 759 yards and 9 touchdowns. He also plays cornerback for his high school, which may be his position when he reaches college.

Jalen Brown – WR – Phoenix (AZ) Mountain Pointe: The 6’2″, 170 lb. wideout has offers from Arizona, Arizona State, Michigan, Michigan State, Northwestern, Ohio State, Oregon, and numerous others.  He was named Gatorade’s Player of the Year in Arizona after a junior season in which he had 67 catches for 1,235 yards and 18 touchdowns, to go along with his 26 tackles, 5 interceptions (1 of which was returned for a touchdown), and 1 fumble recovery. Michigan is looking for a slot receiver to complement the two bigger receivers (Drake Harris, Maurice Ways) who are already committed.

Noah Furbush – LB – Kenton (OH) Kenton: Furbush is a 6’4″, 240 lb. prospect with offers from Michigan, Michigan State, Nebraska, Northwestern, Purdue, and Tennessee, among others.  As a junior in 2012, he had 115 tackles and 1 forced fumble.  He is unranked by ESPN, Rivals, and Scout, but he’s a 3-star and the #52 OLB to 247 Sports.  This is his second visit to Michigan.  Personally, I think Furbush looks more like a future weakside end, but he’s being recruited as a SAM linebacker.

Jamarco Jones – OG – Chicago (IL) De La Salle: Jones is a 6’5″, 290 lb. prospect who has narrowed things down to Michigan, Michigan State, and Ohio State. According to 247’s Composite ranking, he’s a 4-star, the #4 offensive tackle, and the #49 overall player for 2014. Most projections have him going to Ohio State, but there are some rumblings that Michigan is making a late push. He has set an announcement date for June 27.

Jeff Jones – RB – Minneapolis (MN) Washburn: Jones is a 6’0″, 194 lb. prospect with offers from Kentucky, Iowa, Iowa State, Michigan State, and Wisconsin, among others; he has been committed to Minnesota since March, but is considering other options. According to 247’s Composite ranking, he’s a 4-star, the #9 running back, and the #144 overall prospect. As a junior in 2012, he had 110 carries for 1,002 yards and 9 touchdowns.

Jacques Patrick – RB – Orlando (FL) Timber Creek: Patrick is a 6’1″, 213 lb. back with offers from Alabama, Florida, Florida State, Miami, Michigan, Ohio State, and USC, along with many others. The class of 2015 prospect claims a 4.6 forty and had 231 carries for 2,032 yards and 29 touchdowns as a sophomore in 2012.  Patrick is making a swing through the midwest to see Michigan, Michigan State, Notre Dame, and Ohio State, and his cousin Terel Patrick coaches at Detroit (MI) King – which sent Dennis Norfleet to Michigan recently.

Frank Ragnow – OT – Chanhassen (MN) Chanhassen: Ragnow is a 6’6″, 271 lb. prospect with offers from Arkansas, Cal, Florida State, Minnesota, Nebraska, and several others. According to 247’s Composite ranking, he’s a 3-star, the #41 offensive tackle, and the #527 overall player.