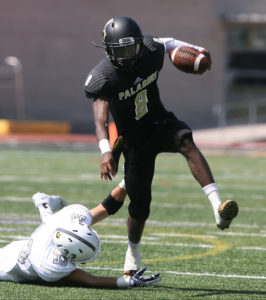 Thanks to Josh for the recent donation! If you would also like to donate to the site redesign drive, please use Paypal (on the left sidebar) or do some shopping on Amazon (LINK). Muchas gracias!
—————

ADDED TO THE BOARD: 2016
Moultried (GA) Colquitt linebacker Ja’Quain Blakely was offered by Michigan. He’s a 6’2″, 205 lb. prospect with offers from Arkansas, Florida, Iowa, Mississippi State, Nebraska, and Tennessee, among others. He’s a 247 Composite 3-star, the #34 outside linebacker, and #476 overall. Blakely has some good coverage ability and changes direction well in space. He named Florida his early leader after they offered, although other schools have continued to come in with offers in recent weeks.

Lake Forest (IL) Academy defensive end Daniel Joseph was offered by Michigan. He’s a 6’3″, 240 lb. prospect with offers from Illinois, Iowa, Michigan State, Nebraska, and Stanford, among others. He’s a 247 Composite 4-star, the #16 strongside end, and #267 overall. Joseph looks a little passive at times, especially when taking on blockers, but he’s an aggressive tackler. He also shows some impressive athleticism in the linked highlight when he leaps for a one-handed touchdown reception, although he does not consistently show that kind of effort. His two leaders at this time appear to be Iowa and Michigan State.

Hit the jump for a couple guys added to the board, several guys who committed elsewhere, and some random bits.

Savannah (GA) Christian wide receiver Demetris Robertson decommitted from Alabama. Robertson is a 6’1″, 165 lb. prospect who is now considering Georgia, LSU, Stanford, and possibly others. He’s a 247 Composite 4-star, the #1 athlete, and #35 overall. He’s blazing fast and claims a 4.38 forty. Robertson was originally recruited by Michigan as a wideout, although he could play several different skill positions in college. The linked highlights say that he touched the ball 25 times in his first four games and scored 10 touchdowns.

Paramus (NJ) Catholic wide receiver Donald Stewart was offered by Michigan. He’s a 6’4″, 180 lb. prospect with offers from Iowa, Maryland, Northwestern, and Rutgers, among others. He’s a 247 Composite 3-star, the #148 wide receiver, and #1030 overall. Stewart has good size and just so-so speed, but where he makes hay is with his precise attention to route running. He attends the alma mater of Jabrill Peppers and Juwann Bushell-Beatty, which is also the former team of recruiting coordinator Chris Partridge. Steve Lorenz of 247 Sports recently put in a Crystal Ball pick for Stewart to Michigan.

OFF THE BOARD
Cleveland (OH) St. Ignatius offensive tackle Liam Eichenberg committed to Notre Dame. His affection for Notre Dame was the worst kept secret in the midwest.

Oradell (NJ) Bergen Catholic quarterback Jarrett Guarantano committed to Tennessee. I had pegged Guarantano for Ohio State initially, but Texas quarterback Tristen Wallace committed to the Buckeyes first. As soon as Guarantano heard, he said he would be announcing that afternoon, and he chose the Volunteers. Michigan was not actively recruiting Guarantano since the Harbaugh hire.

Santa Ana (CA) Mater Dei offensive tackle Frank Martin II committed to USC. The Trojans also picked up another big-time tackle this weekend in Nathan Smith, whom Michigan was feeling out but had not yet offered.

Charlotte (NC) Ardrey Kell defensive end Julian Okwara committed to Notre Dame. He had named Michigan to his top five prior to the announcement, but he had never visited Ann Arbor. Okwara’s brother, Romeo, also plays for Notre Dame.

Santa Ana (CA) Mater Dei linebacker Curtis Robinson committed to Stanford. A teammate of Martin’s, Robinson was one of the new staff’s first volley of offers in the Golden State. On the bright side, Michigan is going so hard after California kids that not all of them can commit to Stanford, UCLA, and USC. So there’s that.

Flower Mound (TX) Marcus tight end Kaden Smith committed to Stanford. Michigan had made some inroads with Smith since Harbaugh was hired, but it was always going to be a long shot. He had basically written off Michigan altogether when Hoke was still in town.

Copperas Cove (TX) Copperas Cove offensive tackle J.P. Urquidez committed to Baylor. A military son, Urquidez transferred from the Big Ten imprint – at Hyattsville (MD) DeMatha – to Copperas Cove after his junior season was finished. That move paid off for the Golden Bears.

Stow (OH) Walsh Jesuit center Jack Wohlabaugh committed to Ohio State. Wohlabaugh’s offer from Michigan was his best offer up until this past weekend, when he visited Columbus for the Buckeyes’ spring game and was offered. He committed on the spot. Wohlabaugh is the son of former NFL center Dave Wohlabaugh, a Super Bowl champion with the New England Patriots.