Davis did not see the field during his first two years on campus, but last year the fruits of his labor showed when he played in the blowout victory over Notre Dame. For his efforts in practice, he was named Scout Special Teams Player of the Year.

Maybe Davis’s time will come this year. Fellow walk-on safety Louis Grodman (5 tackles in 2019) has run out of eligibility, perhaps opening up a spot on special teams for someone like Davis. There will be others battling for playing time, of course, but Davis seems to be ascending up the special teams depth chart. He may not see the field on defense, but I would expect #23 to be running downfield on some kickoffs in 2020.

There’s not a whole lot to say about Davis at this point. He went from being listed at 6’1″ and 180 lbs. last year to 5’11” and 202 lbs. this year, so he got shorter and put on 22 lbs. That’s an impressive one-year growth pattern! When we saw him in the spring, he was being slower than Michigan’s scholarship offensive skill players. Not a surprise. This year Davis is bound to fit into the same general niche, which is as a borderline special teamer. 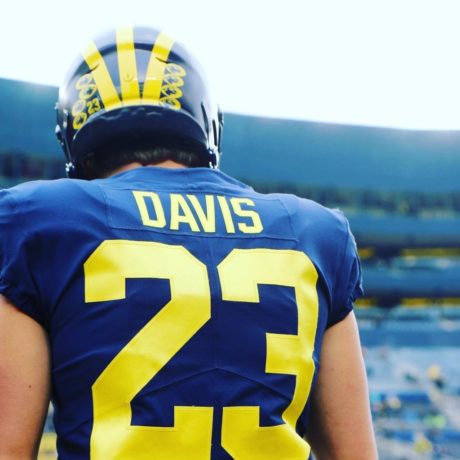 
Davis is another guy like Tyler Cochran (LINK) who had some pretty decent film coming out of high school. Davis was Scout Team Special Teams Player of the Week against Maryland last year, which isn’t too bad for a true freshman walk-on. Davis has a little more agility than Cochran, which I think could help him get a leg up in the race to be a special teams contributor. He may need to add some more weight before he gets on the field much, but I think he has some solid potential.