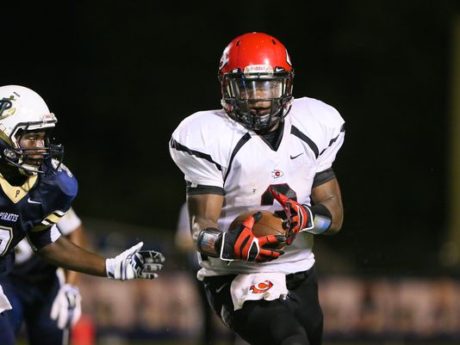 Thanks to those of you who have been using the Amazon link(s) to purchase items. As I mentioned before, right now 50% of my Amazon revenue is being donated to the Chad Tough Foundation. That means you helped donate $40 to Chad Tough in the month of February. If you want to donate straight to ChadTough, you can follow this link here (LINK).

I was trying to churn out spring practice previews last week, so the recruiting update got pushed back. And with the way Michigan is firing out offers under Jim Harbaugh, that means there are a ton of updates. Today is simply a look at the news about offensive products, with defensive guys hopefully to come tomorrow morning.

ADDED TO THE BOARD: 2017
Clinton (MS) Clinton running back Cam Akers decommitted from Alabama. He’s a 5’11”, 210 lb. prospect who also has offers from Auburn, Florida State, Georgia, LSU, and Miami, among others. He’s a 247 Composite 4-star, the #3 running back, and #36 overall. A high school quarterback, he threw for 2,331 yards, 20 TDs, and 8 INTs last season; he also ran 169 times for 1,418 yards and 16 TDs. However, he is not expected to play QB at the next level. Akers recently said that he would probably take a visit to Michigan in the fall, but he lists Georgia and Ole Miss as his leaders now. The decommitment was not surprising, since Alabama also has #1 running back (and #1 overall player) Najee Harris committed, too.

Millbrook (AL) Stanhope Elmore tight end Zech Byrd was offered by Michigan. He’s a 6’6″, 235 lb. prospect with offers from Alabama, Florida, and Ole Miss, among others. Byrd is unranked at this point, because a vast majority of his offers have come in the last couple of weeks. He has the body to play tight end or defensive end at the next level, but he is very raw and doesn’t have a great feel for the game on either side.

Brunswick (GA) Brunswick offensive tackle D’Antne Demery was offered by Michigan. He’s a 6’6″, 308 lb. prospect with offers from Alabama, Auburn, Florida, Georgia, South Carolina, and Tennessee, among others. He’s a 247 Composite 4-star, the #24 offensive tackle, and #158 overall. He has already named Georgia his leader, so it might be tough to pull him out of the Peach State.

Hit the jump for lots and lots more offers, including a new 2019 tender.