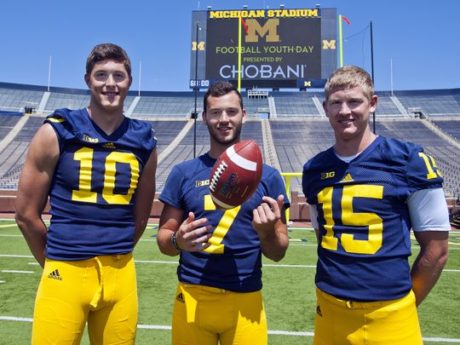 Several weeks ago, I posted a poll asking, Who was the MVP of Michigan’s 2015 season? Here were the results of the poll:

(Yes, I realize that because of rounding, the percentages add up to 101%.)

My vote went to Jake Rudock, who struggled early but played extremely well during the second half of the season. With any other quarterback on the roster leading the team, Michigan wouldn’t have approached 10 wins, in my opinion. I don’t know if the same can be said about any other individual player.

What’s your argument for your pick?

END_OF_DOCUMENT_TOKEN_TO_BE_REPLACED The 2015 All-Big Ten Offense was released on Tuesday night (LINK). Junior tight end Jake Butt was named Kwalick-Clark Tight End of the Year. Butt has 48 catches (#2 on the team), 620 yards (#3), and 3 touchdowns (#3). Among tight ends in the Big Ten, he was ahead of Iowa’s Henry Krieger Cole by 19 catches and Minnesota’s Brandon Lingen by 225 yards, though a couple tight ends had more touchdown catches.

Hit the jump for the Coaches and Media teams.

END_OF_DOCUMENT_TOKEN_TO_BE_REPLACED

That was uglier than expected. And frankly, it was uglier than it should have been. For all the talk of Jim Harbaugh being a master motivator, most of the team laid an egg on Saturday. I suggested on Twitter that maybe Michigan should have hired Brady Hoke as a special consultant for Ohio State week. Obviously, that was a tongue-in-cheek comment, but Hoke took worse teams and went 1-3 against the Buckeyes, including a couple close losses and some exciting performances from Devin Gardner. We knew that Ohio State would run tempo, which would be a problem for Michigan’s defense, which was already missing two starting linemen and a key backup. The immediately concerning thing was that Ohio State was making plays early in the game. An unblocked inside linebacker facing a quarterback in the hole is a win for the defense – and normally a dream come true for a linebacker – but Joe Bolden whiffed and J.T. Barrett scored a touchdown. If you can’t make that play when you’re fresh, then it’s going to be a long day against a team that runs tempo.

END_OF_DOCUMENT_TOKEN_TO_BE_REPLACED

Let’s see more of this guy on offense . . . Jehu Chesson. I only say this because Chesson appeared to hurt his shoulder when he was mugged in the process of earning a pass interference call. He fell hard on his left elbow in the endzone after throwing up his arms in exasperation. Michigan needs Chesson and his speed to beat Ohio State. He has 7 touchdowns over his last four games, and he had 4 catches for 69 yards – along with a 20-yard run – before he left Saturday’s game. He also recovered a muffed punt.

Let’s see less of this guy on offense . . . the referee announcing false start penalties and snap infractions. The pre-snap penalties for the past two weeks have been infuriating.

Let’s see more of this guy on defense . . . Taco Charlton as a 4-3 defensive end. I don’t like the idea of Charlton playing Buck linebacker, as some people have suggested, because I don’t think he holds much value as a guy who moves around, blitzes from various spots, etc. However, with Michigan’s current personnel, I think they’re best served by running a 4-3 with Charlton – who was previously a backup – out there along with Maurice Hurst, Jr., Willie Henry, and Chris Wormley. Those are their best four linemen. Michigan needs to be intelligent with how they rotate, because the backups are pretty weak. But at this point in the year, everyone is as conditioned as they’re going to be, and they might have to play a few more snaps than what is ideal simply because you want your best vs. their best.

Let’s see less of this guy on defense . . . the referee announcing offsides penalties, defensive holding, etc. Again, the pre-snap penalties are ridiculous. An occasional pass interference penalty or offsides call is to be expected, but Michigan was penalized 13 times for 117 yards last week. (Michigan’s record for penalties is 15 in one game.)

Play of the game . . . Jarrod Wilson tracking down Saquon Barkley. Penn State started off the game with a 56-yard run by freshman running back Barkley, and some teams would have been facing a 7-0 deficit just a couple plays into the game. Wilson was Michigan’s deep safety, and he didn’t have an angle as Barkley broke through the line, but Wilson sprinted to track him down around the 5-yard line. Michigan held on for three consecutive plays and forced Penn State to settle for a field goal, a 3-0 lead, and disappointment.

MVP of the game . . . Jake Rudock. Rudock was very efficient against a tough front seven. Penn State was giving up just 159 yards/game through the air, and Rudock finished with 256 yards on 25/38 passing (65.8%) for 2 touchdowns and 1 interception. The running game was going nowhere (2.9 yards/carry on 30 attempts), but Rudock spread the ball around to nine different receivers. The main trio of tight end Jake Butt and wide receivers Jehu Chesson and Amara Darboh combined for 16 catches, 203 yards, and 2 touchdowns.