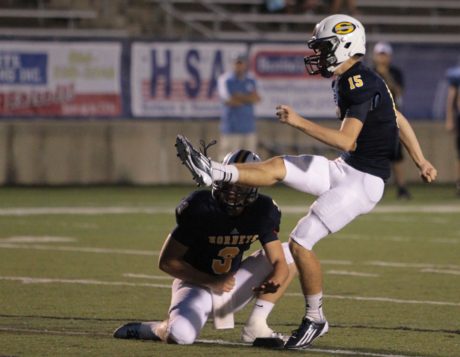 COMMITMENT
Saline (MI) Saline kicker Ryan Tice committed to Michigan as a preferred walk-on. He’s going to enroll in January, when he will presumably start competing for the jobs that will be vacated by seniors Matt Wile and Will Hagerup.

OFF THE BOARD
Cleveland (OH) Benedictine linebacker Jerome Baker flipped from Florida to Ohio State. I was a bit surprised when he committed to the Gators over the Buckeyes, anyway, so this makes a little sense, especially in light of Florida’s struggles and Ohio State’s success. Meanwhile, Cincinnati (OH) St. Xavier linebacker and Ohio State commit Justin Hilliard is taking another visit to Iowa, where his older brother is a running back. These two things may or may not be related, but Urban Meyer might gain Baker while losing out on Hilliard.

Over on Recruiting Season, I posted a profile of Farmington Hills Harrison DE Khalid Kareem. 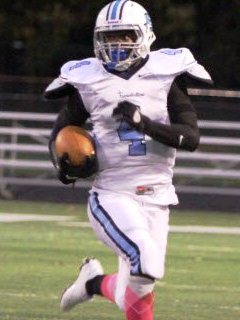 ADDED TO THE BOARD: 2015
Cleveland (OH) Benedictine linebacker Jerome Baker was offered by Michigan. He’s a 6’1″, 205 lb. prospect with offers from Florida, Nebraska, Ohio State, Penn State, Tennessee, and West Virginia, among others. According to 247 Sports, he’s a 4-star, the #2 athlete, and the #50 player overall for 2015. He plays running back in addition to linebacker, but I think he has more of a future on defense. His leader appears to be Ohio State, so you may not want to get your hopes up too much.

OFF THE BOARD
Chesapeake (VA) Oscar Smith defensive tackle Andrew Brown committed to Virginia. Brown mentioned wanting to visit Michigan a couple months ago, but nothing ever transpired. This is Virginia’s third Rivals 5-star commitment in the last two classes, joining Quin Blanding and Taquan Mizzell.

Chicago (IL) De La Salle offensive guard Jamarco Jones committed to Ohio State. This was somewhat expected, and unless there’s some unexpected attrition, it looks as if Michigan might stick with just two offensive line commits in the 2014 class.

VISITORS
The coaches were mostly on vacation, so there weren’t many visitors this past week. However, Huntersville (NC) SouthLake Christian running back Robert Washington and wide receiver Connor O’Donnell swooped through Ann Arbor for a visit. Both are 2016 prospects who are committed to Mississippi State. They camped at Michigan a couple weeks ago, went to Notre Dame for a camp, and then visited Michigan again. It was Washington’s third trip to Ann Arbor in the past few months, despite no offer just yet.

MISCELLANEOUS
Here’s a list of prospects attending Nike’s The Opening this week.