ADDED TO THE BOARD: 2016
Rancho Santa Margarita (CA) Santa Margarita Catholic quarterback K.J. Costello was offered by Michigan. He’s a 6’4″, 213 lb. prospect with offers from Cal, Florida State, Miami, Tennessee, and Virginia. 247 Sports ranks him as a 4-star, the #5 pro-style quarterback, and #139 overall in his class. Costello has a bit of a hitch in his throwing motion that slows down his release, but otherwise, he’s got a strong arm with good accuracy. Michigan has now offered four quarterbacks in the 2016 class (two more are listed below, plus Dwayne Haskins, Jr. received his two weeks ago), and Costello seems the most enthusiastic about Michigan.

Lake Stevens (WA) Lake Stevens quarterback Jacob Eason was offered by Michigan. He’s a 6’5″, 205 lb. prospect with offers from Alabama, Florida, Florida State, Georgia, Miami, Notre Dame, Oklahoma State, Oregon State, and Tennessee, among others. He’s a 247 Sports 5-star, the #1 pro-style quarterback, and #5 overall. As a sophomore in 2013, he completed 209/350 passes for 2,941 yards, 23 touchdowns, and 8 interceptions. Eason is a tall, lanky kid with a very strong arm, good accuracy, and a high football IQ. Eason’s father is Tony Eason (not that Tony Eason), a former wide receiver for the Fighting Irish.

Thousand Oaks (CA) Westlake quarterback Malik Henry was offered by Michigan. He’s a 6’3″, 180 lb. prospect with offers from Florida State, Nebraska, Notre Dame, UCLA, USC, and Wisconsin, among others. He’s a 247 Sports 4-star, the #1 dual-threat quarterback, and #13 overall. Henry has a strong arm, and while he’s listed as a dual-threat guy, he seems like one of those guys who likes to throw first but can move the chains well with his feet. Somewhat like a Devin Gardner, he can make plays from the pocket but his feet are an added bonus.

Panama City (FL) Bay defensive end Janarius Robinson was offered by Michigan. He’s a 6’5″, 230 lb. prospect with a 4.62 forty. He has offers from Clemson, Florida State, and Tennessee, among others. He’s a 247 Sports 4-star, the #5 weakside end, and #65 overall. The front-runner appears to be Florida State, but Robinson is planning a trip to Ann Arbor for later in June.

Reisterstown (MD) Franklin wide receiver Steven Smothers was offered by Michigan. He’s a 5’9″, 152 lb. prospect with a 4.39 forty. He has offers from Alabama, Florida State, Georgia, Ohio State, Penn State, Rutgers, Tennessee, Virginia, Virginia Tech, and West Virginia, among others. He’s a 247 Sports 4-star, the #9 wide receiver, and #62 overall. In a recent interview with MGoBlog, Smothers claimed to be from another planet and said he’s the most dominant player in the 2016 class, so confidence is not lacking in this one. His teammate is 2015 offensive guard prospect Patrick Allen, who also holds a Michigan offer.

OFF THE BOARD
Merrillville (IN) Andrean linebacker Josh Barajas flipped from Penn State to Notre Dame. Penn State had some significant recruiting momentum, and this is a bit of a blow to what is still a very good recruiting class for the Nittany Lions. New coaches often bring at least a short wave of hype, so we’ll see how long at lasts with James Franklin.

Jefferson City (MO) Helias tight end Hale Hentges committed to Alabama. Hentges had visited Michigan, but he has always been at least the third-most likely player at his position to commit to Michigan (behind Chris Clark and Tyrone Wheatley, Jr.), so this isn’t a big blow.

MISCELLANEOUS
Here’s a list of various kinds of lists: 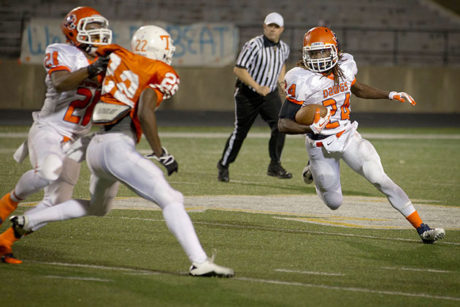 McKinney (TX) North running back Ronald Jones II was offered by Michigan. He’s a 6’0″, 185 lb. prospect with offers from Arkansas, Baylor, Clemson, Iowa, Michigan, Oklahoma, and Oklahoma State, among others. He claims a 4.45 forty and is a 247 Composite 4-star, the #14 running back, and #169 overall. As a junior in 2013, he had 244 carries for 2,406 yards and 39 touchdowns. Jones is an explosive runner and has some deceptive power in a fairly thin frame.

ADDED TO THE BOARD: 2016
Allen (TX) Allen offensive tackle Gregory Little was offered by Michigan. He’s a 6’6″, 280 lb. prospect with offers from Baylor, Clemson, Oklahoma, Oklahoma State, TCU, Texas, Texas A&M, and Texas Tech, among others. Early buzz suggests that he’ll be a 5-star prospect and one of the top few players in the country for 2016.

OFF THE BOARD
Norcross (GA) Norcross defensive end Lorenzo Carter committed to Georgia. The Bulldogs were the favorite with Florida and Florida State trailing behind.

New Orleans (LA) John Curtis wide receiver Malachi Dupre committed to LSU. Dupre was considered a heavy LSU lean throughout his recruitment, and he ended up with the Tigers despite UCLA making a hard run at him.

Norfolk (VA) Lake Taylor defensive tackle Nyquan Harris committed to Marshall. There was some question about whether Harris ever held a Michigan offer, but he was listed on one of the recruiting sites as having one, so here he is.

Gardena (CA) Junipero Serra cornerback Adoree’ Jackson committed to USC. This was somewhat of a surprise move because a lot of people thought he would head to Florida due to their track program. However, late-in-the-process visits to UCLA and USC seemed to give the Trojans an extra shot to impress (UCLA never seemed like an extremely serious option), and new head coach Steve Sarkisian took advantage.

Florissant (MO) Hazelwood Central offensive tackle Roderick Johnson committed to Florida State. This seemed to be a long time in the making. For what it’s worth, Johnson was high on my list of desired players in the 2014 class, so I expect him to turn into a very good player in Tallahassee.

Minneapolis (MN) Washburn running back Jeff Jones solidified his commitment to Minnesota and signed his NLI. Jones blew up a little bit after the Under Armour All-American Game, of which he was MVP, and earned offers from Florida and Michigan. However, there were some reported issues with Jones’s academics and some uncertainty of whether he would qualify this year or not, so Michigan stopped recruiting him. He was also considering Iowa State up until the end.

Sarasota (FL) Booker running back Marlon Mack committed to South Florida. Mack earned an offer late in the process when Michigan was looking for a runner. He promptly decommitted from UCLA after earning an offer from the Wolverines, then Michigan stopped recruiting him, he was rumored to have committed to Louisville, and finally settled on USF.

Southfield (MI) Southfield defensive end Malik McDowell committed to Michigan State . . . kind of. The long and difficult story has been well documented, but the gist of it is that he likes MSU, in part because they really know how to party in East Lansing. Dad isn’t a fan of Michigan State and said he wants Malik to get out of the state to remove himself from some friendly influences. That’s nothing compared to Mom, who didn’t attend the signing day press conference and won’t sign Malik’s National Letter of Intent. Without her signature as the guardian (the parents are separated), McDowell can’t fax a binding NLI. So he’s verbally committed to MSU right now, but Florida State, Michigan, and Ohio State are all technically options right now. Usually kids get their way in these situations, so he’s very likely to end up a Spartan.

New Orleans (LA) John Curtis safety Mattrell McGraw committed to Oregon. He’s the teammate of Dupre and linebacker Kenny Young, both of whom had offers from the Wolverines.

Plantation (FL) American Heritage wide receiver Isaiah McKenzie committed to Georgia. McKenzie’s recruitment was a roller coaster ride as he was rumored to have committed to Notre Dame a few months ago, then planned to sign with Ole Miss, and finally committed to Georgia after receiving an offer from them just before National Signing Day. Running back teammate Sony Michel – who visited in 2012 when his brother’s UMass team played in the Big House – signed with Georgia, too, so they end up being a package deal.

Jenks (OK) Jenks safety Steven Parker committed to Oklahoma. This was long expected, although he flirted with the idea of visiting Ann Arbor even when the coaches had stopped recruiting Monroeville (PA) Gateway’s Montae Nicholson, who proceeded to commit to Michigan State.

Forestville (MD) Bishop McNamara offensive tackle Damian Prince committed to Maryland. It was quite a coup for the Terrapins to keep the 5-star player in his home state, but they have done a good job in recent years of keeping guys home (Stefon Diggs, Wes Brown, etc.). Florida State was the other major player near the end.

Jacksonville (FL) Raines cornerback Lamont Simmons committed to USC. Simmons was one of numerous guys to decommit from Rutgers throughout the process. He’s a big corner who could also play safety for the Trojans.

Long Beach (CA) Poly safety John Smith committed to USC. Early in the process, I thought Smith might end up at Michigan or Notre Dame. He was not fond of Lane Kiffin as the head coach at USC, and he spoke highly of the Wolverines and the Irish. However, as soon as Kiffin was axed, it seemed like USC jumped to the forefront once again.

Coppell (TX) Coppell defensive end Solomon Thomas committed to Stanford. He had people guessing up until the end with some people guessing Arkansas and others picking UCLA. At one time he was thought to be high on Ohio State, so Michigan dodged a bit of a bullet with a good player staying out west.

Chicago (IL) Simeon offensive tackle Denzel Ward committed to Syracuse. Ward was once committed to Michigan, moved from Chicago to Florida without informing Michigan’s coaches, decommitted, committed to Purdue, moved back to Chicago but attended a different school, decommitted from Purdue, and ended up signing with the Orangemen.

Memphis (TN) White Station linebacker Petera Wilson committed to Tulsa. I have been to Tulsa, and it’s beyond me why someone would choose that school when he has offers from Alabama, Florida, Florida State, LSU, UCLA, and USC, among others. Luckily for Tulsa, it’s not my decision.

Fort Lauderdale (FL) University School defensive end Richard Yeargin III committed to Clemson. He had previously been committed to Notre Dame, where I think he would have been an outside linebacker. But in Clemson’s scheme, I believe he will end up as a weakside end.