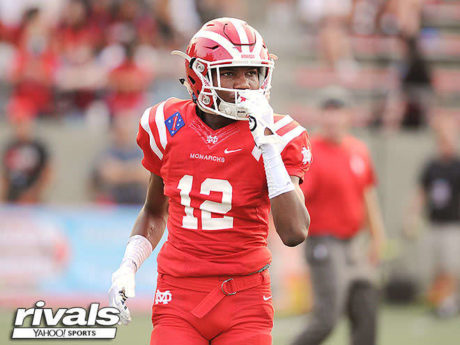 I haven’t done one of these 2020 recruiting updates in a while, because it seems like there’s so much action with the current recruiting class. But here’s a huge dump of information on the 2020 recruits on the defensive side of the ball, along with some guys who committed to other schools.

Fort Lauderdale (FL) St. Thomas Aquinas defensive end Devon Betty was offered by Michigan. He’s a 6’0″, 190 lb. prospect with offers from Ohio State, Oklahoma, and South Carolina, among others. He’s a 247 Sports 4-star, the #5 outside linebacker, and #57 overall. Michigan has made several attempts to get a foothold at Aquinas, but it’s tough sledding at a powerhouse program that every big-time program recruits.

Orlando (FL) Dr. Phillips linebacker Stephen Dix, Jr. was offered by Michigan. He’s a 6’0″, 205 lb. outside linebacker with offers from Clemson, Florida, and Ohio State, among others. He’s a 247 Sports 3-star, the #23 outside linebacker, and #325 overall. He attends the alma mater of former Michigan commit Demetrius Hart, and it’s where former Michigan tight end Ricardo Miller began his high school career before transferring to Ann Arbor (MI) Pioneer.

Upland (CA) Upland linebacker Justin Flowe, Jr. was offered by Michigan. He’s a 6’3″, 225-pounder with offers from Alabama, Ohio State, Oregon, UCLA, and USC, among others. He’s a 247 Sports 5-star, the #2 outside linebacker, and #4 overall. He’s likely bound for USC, but here are his highlights, anyway:

Highland Springs (VA) Highland Springs safety Malcolm Greene was offered by Michigan. He’s a 5’11”, 180 lb. prospect with offers from Maryland, North Carolina, and Virginia Tech, among others. He claims a 4.57 forty, a 230 lb. bench, and a 350 lb. squat.