Michigan and Penn State are two storied programs, but they didn’t play each other until 1993, when the Nittany Lions joined the Big Ten. Immediately, Michigan ripped off a couple of the biggest plays in series history, with a 48-yard punt return touchdown by Derrick Alexander and a 47-yard touchdown run by Tyrone Wheatley. Wheatley had Michigan’s longest play in series history in the second meeting.

Hit the jump to see video of the top three longest plays.

END_OF_DOCUMENT_TOKEN_TO_BE_REPLACED Thanks to Lee for the generous Paypal donation to help out with TTB’s web hosting bill!

Kevin Koger
High school: Toledo (OH) Whitmer
Ratings: Rivals 4-star, #4 TE, #144 overall
College: Michigan
Other notable offers: Michigan State, Ohio State
Scoop: Koger played as a backup in 2008, but he then went on to start 30 games over his final three years in Ann Arbor. He made 59 career receptions for 756 yards (12.8 yards/catch) and 9 touchdowns. He did not pursue an NFL career and has been coaching high school and college ball since then, including being an offensive graduate assistant at Michigan. He is currently the wide receivers coach at Eastern Kentucky.

Brandon Moore
High school: Trotwood (OH) Trotwood-Madison
Ratings: Rivals 4-star, #8 TE, #187 overall
College: Michigan
Other notable offers: Clemson, Florida State, Georgia, Miami
Scoop: Moore redshirted in 2008 and struggled to get on the field for the next couple years. He would go on to make one start in 2012, but he totaled just 2 catches for 28 yards in his career. He went undrafted in 2012 and did not play in the NFL.

END_OF_DOCUMENT_TOKEN_TO_BE_REPLACED

In his own words – Kevin Koger, Part 2 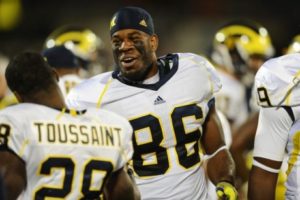 In Part 2 of my interview with former Michigan co-captain Kevin Koger, we take a deeper look at the 2010 and 2011 seasons.  He talked about the coaching change, his own leadership, and the teammates that helped him along the way.