Brown was negatively affected by the departure of Pep Hamilton and the arrival of Josh Gattis. Gattis ditched the more traditional fullback position for more of a spread offense, which hung Brown out to dry a little bit. After playing in three games as a backup fullback in 2018, he played four games last season but only on special teams.

This year looks to be more of the same from Brown. His best bet to get on the field will probably be on special teams. One plus is that Ben Van Sumeren – a former bigger back – made a transition to potentially play linebacker, so that could open up a few low-risk snaps late in games for Brown. But by and large, he’s just a quality walk-on for depth and special teams purposes.

Brown came to Michigan as someone who looked like a classic middle linebacker type but found himself playing fullback in Michigan’s tight end- and fullback-heavy offense. As a redshirt freshman in 2018, he backed up Ben Mason and Jared Wangler, playing fullback in three blowout victories. The off-season transition to a new offense that de-emphasizes the fullback was one that I thought might see Brown move back to linebacker, but instead he remains listed as a fullback, where he will presumably be some sort of backup to Mason once again. I liked Brown’s film coming out of high school, but the position might not dictate that a fullback – let alone a backup – sees the field very much. Would you rather have Matt Brown on the field or one of numerous skilled wide receivers? I think Brown will get an opportunity to play this season, but not as much as he was probably hoping if Pep Hamilton had remained the offensive coordinator. 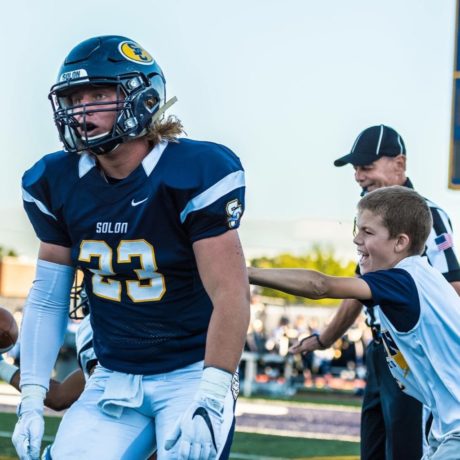 
Brown was one of the most impressive preferred walk-ons in Michigan’s 2017 class. He posted 155 tackles, 22 tackles for loss, 2 interceptions, and 3 fumble recoveries as a senior in 2016. Brown made the switch to fullback at Michigan, and I might even be underrating this kid at #108. I think he has a good physical and mental makeup for the fullback position, but since he was mostly a defensive player in high school, he may take some time to get acquainted with all the offensive stuff. I expect Ben Mason and Ben VanSumeren to get the bulk of the snaps at fullback, but Brown looks like a guy who would have no problem running full speed into a linebacker or two.