Congratulations to the Michigan basketball team, which finally provided Wolverines fans with some hope after years of flailing.  I admittedly didn’t pay a great deal of attention to Michigan basketball for the first couple months of the season, because football is my #1 interest and where I live, Michigan basketball isn’t on television very much.  But the last couple months have been a great deal of fun.  Maybe I’m good luck, because the first game I watched this year was the four-point loss to Ohio State on January 12th and I didn’t watch again until the January 27th victory against MSU, which is about when Michigan started to make its end-of-season run.  The Wolverines finished the season with a 10-5 run after losing six in a row, and three of those five losses were by two points or less.

These kids have nothing to be embarrassed about, and they represented the university well.  I don’t think anybody wanted to play Michigan toward the end of the season.  And for anyone who didn’t think they belonged (*cough* Doug Gottlieb *cough*), take a look at Michigan’s 30-point victory over Tennessee and its near-victory against the defending national champions.  This rag-tag crew of undersized, floppy-haired, barely-able-to-vote ballers had Dookies everywhere holding their breath in fear that a floater in the lane would send the game to overtime.  And in a game that ended on a 28-15 run by Michigan, I’m not so sure the Blue Devils would have been favored to win in that situation.

Nobody really cares about football right now, but I put up a post over at Maize ‘n’ Brew about this weekend’s recruiting visitors.

But in case you didn’t know, Michigan is playing Duke in the third round of the NCAA Basketball Tournament this afternoon.  It will be on CBS beginning at 2:30 p.m.

I think the key to the game (aside from Darius Morris, who’s the team’s most important player) will be Zack Novak.  He needs to have one of his great shooting days in order to pull off the upset.  If Novak has an off day, I don’t think Michigan will have a chance.

I think the game will be competitive, but Duke will end up with about a seven-point victory.  I’ll guess 65-58.

Michigan took its “overrated” #8 seed and drowned #9 Tennessee in a torrential downpour of three-pointers, zone defense, and floppy hair.  Five Michigan players scored in double figures, and two additional Wolverines notched eight points as the Maize and Blue outscored the Volunteers 58-22 from midway through the first half until the final buzzer sounded.

The MVP of the game was Matt Vogrich (top), the sophomore guard who got the momentum going Michigan’s way in the first half with a stepback three-pointer and a backdoor cut for an easy layup.  Vogrich only played 16 minutes total, many of which were in lieu of fellow freshman Tim Hardaway, who was on the bench with foul trouble for a good portion of the first half.  But I don’t know if Michigan would have mustered the energy and offense to overtake Tennessee, which led for much of the first stanza, without the contributions of Vogrich.

I am admittedly not a basketball expert, but it doesn’t take an expert to see what’s working in a 30-point blowout.  Some observations from an amateur viewer, just because I can:

Jordan Morgan has soft hands.  When Morgan was recruited and a bit overweight, I assumed he would be a bruiser inside.  That didn’t make much sense to me in Beilein’s offense, but whatever.  Coming into the game, though, Morgan was hitting 61.7% of his field goals and he just has a soft, simple touch around the basket.  I don’t know that I’ve seen him take a jump shot all year, but why would he when he can just toss up a soft hook shot and virtually guarantee that the ball’s going in?  He’s fun to watch whenever he’s not in foul trouble.

Darius Morris didn’t dribble the entire day.  Hooray.  I know Darius Morris is Michigan’s best player, but it annoys me when he dribbles away 32 seconds of the shot clock and then tosses up an awkward layup or floater attempt between two or three guys in the lane.  Sometimes it’s successful, but boy, is it ugly.  Not once did I see Morris waste the entire shot clock today looking to create his own shot.  The Wolverines moved the ball well, and that started with Morris, who had 9 assists.  Of course, it helps when your team shoots 52% on the day.

Stu Douglass didn’t make me want to punch myself.  I normally want to strangle Douglass, who shoots the ball too much and makes too many turnovers.  As a friend put it, “He thinks he’s better than he is.”  And maybe that’s what you have to think as a kid who’s limited athletically.  But he seems to alternate good games with bad games, and after three straight mediocre games, I guess it was his time to bust out with a good effort.  He finished 5-7 on field goal attempts with 11 points, 5 assists, only 1 turnover, and an invigorating dunk off a behind-the-back pass from Morris in transition.  Of course, this means that he’ll make me give myself a black eye when Michigan faces its third-round opponent (likely Duke) on Sunday.  But hey, nobody expected Michigan to even make the NCAA Tournament, so this game was exciting in itself.

John Beilein ought to win Coach of the Year.  Maybe I’m being a homer, but Michigan has vastly overachieved after losing its two biggest stars from last year’s team (Manny Harris, DeShawn Sims).  This team is largely made up of Darius Morris and then a bunch of players nobody else really wanted.  Getting a victory over a Tennessee team that is in limbo because its coach likes to BBQ too much may not lead to a championship run, but this Michigan team was expected to struggle with even getting to .500 on the season.  For the most part, Michigan played its tough opponents tight (Kansas, Ohio State, Wisconsin, Syracuse), swept in-state rival Michigan State, and has won 21 games (so far) with a bunch of freshmen and sophomores.  If there’s a coach out there who has done more with less, then I don’t know who it is.

Clark Kellogg is like my grandpa in Tokyo.  Kellogg couldn’t tell the difference between Smotrycz, Vogrich, Novak, and Douglass.  I guess when someone is a different race than you, distinguishing characters just aren’t that apparent.

Congratulations to the basketball team.  Go get ’em on Sunday.  Go Blue! 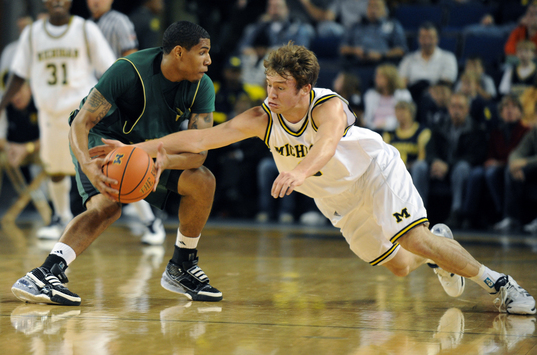 This is a football blog, and I’m certainly no basketball expert.  But as a fan of sports in general, I’m excited about Michigan’s matchup this afternoon with the Tennessee Volunteers.  As if you didn’t already know, the game will be broadcast at 12:40 p.m. EST on TruTV or, if you don’t have it, you can watch it streaming online through the NCAA’s official site.

I’m predicting a 63-59 victory for Michigan.

Congratulations to the basketball team!

Congratulations to the men’s basketball team for getting a #8 seed in the tourney.  The Wolverines will play #9 Tennessee this coming Friday at 12:40 p.m. in Charlotte, North Carolina.  The game will be broadcast on TruTV.