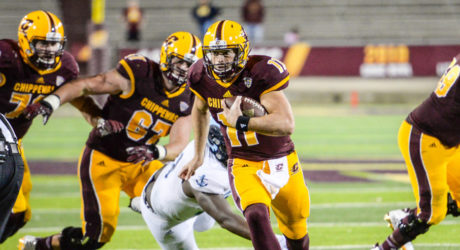 END_OF_DOCUMENT_TOKEN_TO_BE_REPLACED

Am I expecting too much from Michigan’s running backs?

If you’re a frequent reader, I’m sure you’re aware that I’ve been unhappy with the performance of some of the running backs over the past few seasons.  Due to some recent conversations with fellow fans, I started to wonder: am I expecting too much from Michigan running backs?

So I thought I’d do some research.  Below you’ll find a listing of the explosive runs (20+ yards) by each starting running back for the last couple decades.  I don’t have access to each and every run, so what I used was a player’s longest explosive play from each particular game.  The weakness here is that a player with two 20+ yard runs in one game (say, a 50-yarder and a 25-yarder) only has the 50-yarder listed.  Additionally, the maximum number of plays to be listed is 13 (the most games Michigan has played in any given season) and the minimum is 0.
NOTE: I listed each of the team’s top few rushers in the Rodriguez years just for recent comparison’s sake.  However, the player with the most carries is highlighted in yellow.
Denard Robinson 2010 (256 carries): 87, 72, 47, 32, 32, 29, 24, 20, 20 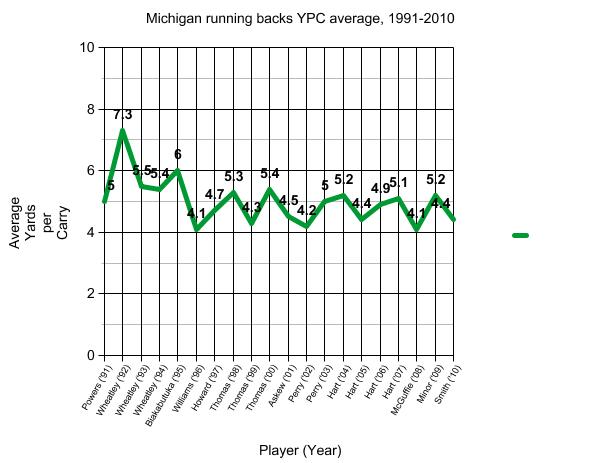 Do those numbers have anything to do with wins?  Probably not.  The same chart as above, overlaid with the wins for each year: 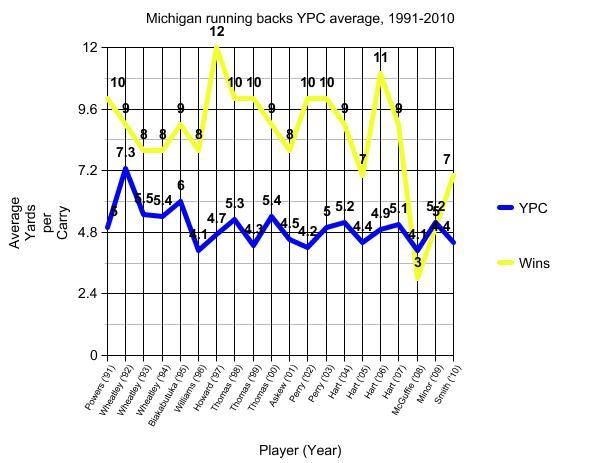 1. Denard Robinson is awesome, as if you didn’t already know.  He had a 20+ yard run in nine out of the thirteen games he played in 2010.  In the last twenty years, that number has been matched only by Tshimanga Biakabutuka in 1995.

2. Anthony Thomas was more of a big play guy than I thought.  He had at least seven rushes of 50+ yards in his career.

4. As far as Michigan running backs go, Vincent Smith falls at the bottom of the heap when it comes to explosive plays.  In his two seasons at Michigan, he has two 20+ yard runs.  The closest one to Smith is the 2005 version of Mike Hart, who missed several games due to injury and got only 150 carries.  Hart’s 64-yarder and 20-yarder in that year are actually pretty close to Smith’s longest two runs from 2010 – a 56-yard touchdown and a 19-yard run.

5. For being an offensive genius, Rich Rodriguez sure didn’t have a great effect on Michigan’s running backs.  I don’t think there’s any question that Michigan’s best running back during his tenure was Brandon Minor, but Minor (109) split carries pretty evenly with Sam McGuffie (118) in 2008.  That was followed by a 2009 in which no running back carried the ball more than 100 times.  Injuries played a big part in the production (or lack thereof) from Minor, Carlos Brown, McGuffie, Shaw, etc.

6. I’m probably overreacting a little bit to yards per carry.  There are certainly more important aspects to winning football games than simple yards per carry, like turnovers, defense, quarterback play, etc.  For example, Michigan didn’t lose 13 games over the past two seasons just because Vincent Smith has been a mediocre running back – the horrible defense played the biggest role in losing most of those games.  But at the same time, the only players with the same or worse rushing averages than Smith were:

a) the often forgotten Clarence Williams in ’96 on an eight-win team
b) Anthony Thomas in ’99, whose 4.3 yards a carry was a full yard below each of his surrounding seasons
c) Chris Perry’s subpar junior season in ’02
d) Mike Hart’s injury-plagued ’05 year
e) Sam McGuffie’s freshman year in ’08, when he suffered from concussions and a horrible unit around him

But so do defenses.  When teams don’t respect your running back’s ability to make big plays, they can concentrate on stopping the pass.  Or, in the case of Denard Robinson-led teams, they can concentrate on stopping the quarterback.  The lack of a big-play threat to play alongside Robinson in the backfield limits his abilities to be as effective a runner as possible.  Imagine a zone read option offense with Tim Biakabutuka or Tyrone Wheatley standing next to Denard Robinson in the backfield.  Which one do you defend?  Or do you curl up into a fetal position and pretend you pulled a hamstring?

Furthermore, big plays take away the opportunity for a team to bog down going from Point A to Point B.  Long runs aren’t just fun to watch – they serve a purpose.  A guy who moves the ball in small chunks might be a fine running back, but at some point his short gains might force a few punts when the offense fails to get a first down.

Clearly, a guy like Biakabutuka doesn’t guarantee you a big play every time he starts a new series.  But he can move the ball in large chunks, and his presence opens up the play action passing game and keeps the defense off balance.

Better running back play.  That’s the bottom line.  Over the last twenty years, Michigan’s running backs have alternated good years with mediocre ones.  On the heels of a poor year from the Wolverines’ backs, it seems Michigan is ready for an upswing in running back production.  Hoke seems committed to running the ball like Michigan used to do, and unlike a season such as 2008, the offensive line should be decent, despite losing a couple senior starters in Steve Schilling and Perry Dorrestein.  Whether it’s Michael Shaw, Fitzgerald Toussaint, Stephen Hopkins, or someone else, the starting running back in 2011 should be better than in 2010.