Greg Dooley “perused” the 2012 Michigan Football media guide and discovered several records that could be broken during the upcoming season.  Unsurprisingly, Denard will almost certainly crush Henne’s record for most career yards gained (9,300), requiring only 1,140 yards this fall to surpass him.  On the downside, he should also pass up Henne for most career interceptions (37), as he’s unlikely to throw fewer than eight picks. 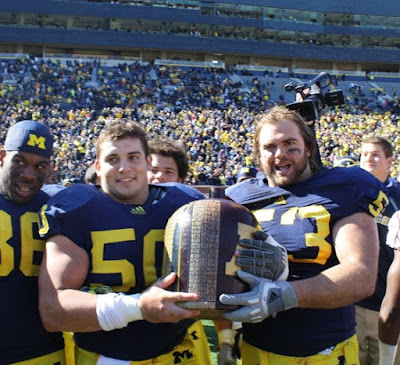 Greg Dooley recently added another great post to his comprehensive coverage of “the greatest trophy in college sports,” titled “Making it official – Jil Gordon and Painting the Little Brown Jug.” This year, Ms. Gordon will be painting the numbers 58 and 0 on the jug, which will make the trophy even better looking. Dooley’s series (listed below) covers “everything you’d ever want to know about the story of the Little Brown Jug” and is infused with additional factoids/information on the history of Michigan football.
Part I: What Really Happened in the 1930s
Part II: Spinning Myths
Part III: Getting it RightPart IV: 2013: A Space Quandary
Part V: Red Wing Roots
Part VI: Is the Greatest Trophy in College Sports a Fake?Part VII: Open Questions
Part VIII: Doc Cooke and the Real Origins of the Rivalry