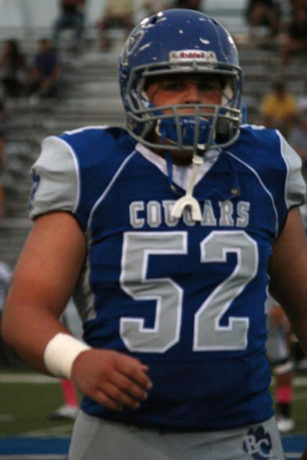 Brady Pallante no longer a greyshirt

Naples (FL) Barron Collier defensive tackle Brady Pallante, who committed as a greyshirt player in February, is now a full-fledged member of the 2014 recruiting class. A greyshirt would have meant that he would graduate from high school in 2014, pay his own way to school in his first semester, and then join the team in 2015.

Here’s his commitment post from April. As a senior here in 2013, he had 60 tackles, 9 tackles for loss, 3 sacks, and a 31-yard fumble return for a touchdown.

The same thing happened in the case of Jeremy Clark from the 2012 class. He was offered a greyshirt role, accepted, and eventually found that the class had room for him.

Naples (FL) Barron Collier defensive tackle Brady Pallante committed to Michigan on Friday.  He chose the grayshirt offer from the Wolverines over a full scholarship from Appalachian State.

Pallante was offered his grayshirt back in February, and he almost committed at the time.  However, he decided to hold off to avoid making a rash decision.  In the meantime, Appalachian State offered him a full ride.  Pallante decided to visit Michigan this week, and it seemed likely that he would take the opportunity to accept the offer.  A grayshirt means that he will start attending Michigan in Fall 2014 on his own dime, but when a scholarship opens up after the season, he will then join the team and begin going to school on scholarship; his true freshman season will be 2015, at which point he will have five years to play four.  Hypothetically, he could redshirt in 2015 and then play the 2016-2019 seasons.  Class of 2012 safety Jeremy Clark also accepted a grayshirt opportunity at one time, but when a scholarship opened up due to attrition, Michigan’s coaches gave him a full ride upon enrollment.  That could very well happen with Pallante, too.

The young defensive tackle has a fair amount of potential, in my opinion.  He’s a true nose tackle in a 4-3 Under defense, because he plays with great leverage as a short, stout fire hydrant.  He uses his hands well to control offensive linemen, he looks tremendously strong in the upper and lower body, and he’s comfortable in either a right- or left-handed stance.  His first step is decently quick, and he does a good job of grabbing at ankles coming through the line, tripping up ball carriers before they can get a full head of steam.

Pallante will never be massive, since he’s only listed at 6’1″; often players are even shorter, so he might only be about 6’0″ tall.  He will probably top out at around 300-310 lbs.  His speed leaves a little bit to be desired; he won’t be able to chase players from sideline to sideline, and he won’t be much of a pass rusher.

Overall, I think Pallante can be a solid contributor, although perhaps not a stud at Michigan.  He won’t put up big numbers like Mike Martin did, but there are some similarities there in size and technique.  Defensive coordinator Greg Mattison had a similar player with the Baltimore Ravens in the form of Kelly Gregg; Gregg has put up 80 tackles in a couple seasons and has had up to 3.5 sacks, mostly by playing with great leverage, showing consistent effort, and creating a pile in the middle of the line.