Clayton (OH) Northmont safety Rod Moore committed to Michigan on Sunday afternoon. He picked the Wolverines over offers from Iowa, Kentucky, Maryland, and Notre Dame, among others.

Clayton (OH) Northmont wide receiver Markus Allen committed to Michigan on Tuesday, and he is not to be confused with former USC Heisman winner and NFL running back Marcus Allen, nor former Penn State safety Marcus Allen. He picked the Wolverines over offers from Indiana, Pitt, Purdue, and West Virginia, among others.

Hit the jump for more on Allen’s commitment. 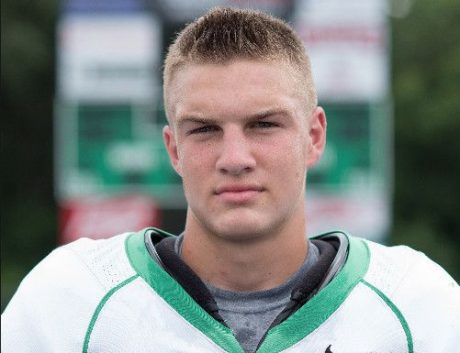 Hit the jump for more on Newburg’s commitment.

END_OF_DOCUMENT_TOKEN_TO_BE_REPLACED

Kaleb Ringer, a linebacker from Clayton, OH, committed to Michigan on Friday night.  It had been strongly rumored, hinted at, etc. for about a month that Ringer would commit to the Wolverines.  He finally made it “official” on Friday, even though a newspaper reporter jumped the gun early last week.  Other options included Cincinnati, Illinois, Indiana, Iowa, Louisville, and Toledo.

Ringer is listed at 6’0″ and 219 lbs.  As a junior, he had 85 tackles, 1 interception, and 1 touchdown.  According to Scout, he’s a 4-star recruit and the #8 middle linebacker prospect in the country.  The other recruiting services haven’t bothered to rank him yet, but when they do, I doubt they’ll place him higher than Scout did.

He’s a thick kid who can drive runners back into the hole and stop their forward momentum.  He stays low and drives through ballcarriers.  He also seems to do a pretty good job of wading through the trash to find the ball.  However, the criticism I’ve heard most often – and something I agree with – is that he lacks a great deal of speed and athleticism in the open field.  Ringer is not a naturally gifted, fluid athlete.  He’s your quintessential thumper.  Typically, a kid his size would end up at WILL, but I’m not sure he has the athleticism to do what a weakside linebacker would need to do.

The Wolverines seem to be loading up on inside linebackers recently, with incoming freshmen Kellen Jones, Desmond Morgan, and Antonio Poole; and 2012 commits Ringer and Royce Jenkins-Stone, both of whom committed this past weekend.  With the exception of Poole, all of them seem like future MIKE linebackers.  Kenny Demens will be a redshirt junior returning starter in 2011 and likely stick around into 2012, which means Ringer should have a chance to redshirt as a freshman.  The only other middle linebacker on the roster beyond 2011 should be Isaiah Bell, who will be a redshirt junior when Ringer arrives on campus.