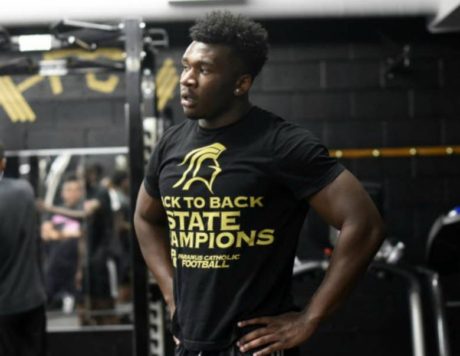 Singleton is 6’2″, 215 lbs. and was selected to the Under Armour All-American Game before he tore his ACL early in his senior season.

Hit the jump for more on Singleton’s commitment to Michigan.

END_OF_DOCUMENT_TOKEN_TO_BE_REPLACED 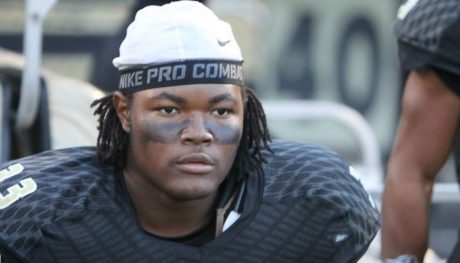 Hit the jump for more on Gary.

END_OF_DOCUMENT_TOKEN_TO_BE_REPLACED 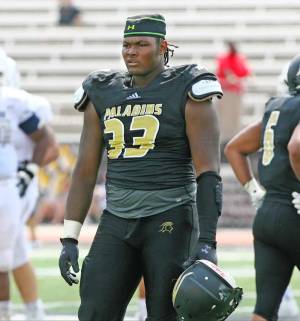 Weaknesses: Stands up too high at times . . . Needs to work on compacting swim move . . . Must improve hand placement . . . Can get caught with hands down or too far outside

Projection: Defensive tackle. Gary is an exceptional athlete for his position and size. He plays against pretty good competition in high school and still looks dominant. One catch in his situation is that he played defensive end last year, whereas he’ll be a tackle in college. He does a good enough job of coming low out of his stance that pad level should not be a major issue; it’s only when he tries to use his speed rush around the outside that he loses good body lean. He will also have to learn how to use his hands a little better, but that is something that can get correct pretty quickly. Gary looks like a 3-tech tackle who will be very hard to handle for offensive guards.

Reminds me of: Warren Sapp. I don’t see a great comparison through Michigan’s history – Alan Branch and Gabe Watson were a little too nose tackle-y, and Mike Martin was mostly about quickness, although he was awfully powerful, too. Sapp was both powerful and quick, which also describes Gary.

Likelihood of committing to Michigan: 247 Sports’ Crystal Ball predictions have Alabama at 52%, Michigan at 31%, and nobody else in double digits. The Wolverines have a couple former Paladins already in the form of redshirt freshmen Jabrill Peppers and Juwann Bushell-Beatty, and they also have the former coach, Chris Partridge, in the role of recruiting coordinator. Gary took a visit to Michigan this spring and thoroughly enjoyed it, but his recruiting process could last until February, and a lot of things can happen between now and then. Michigan is right in the thick of the hunt.

You can see from the scouting report that I really like Peppers’s game.  He is one of the top few prospects in the country – if not the absolute best – and looks to me like the top cornerback in the nation.  He plays safety for the Paladins, so transitioning to college cornerback might take a little work.  But the physical talent and coordination are sufficient for bumping to corner.  Lots of high schools will put their best player at safety so he can affect the whole field, rather than putting him on one side and letting the opponent run or throw away from him.

As for his role at Michigan, he will presumably arrive in 2014 when starting corners Raymon Taylor and Blake Countess are a senior and a redshirt junior, respectively; the projected free safety will be junior returning starter Jarrod Wilson. A spot should be open at strong safety, which is where current freshman Dymonte Thomas projects to play once Thomas Gordon graduates after the 2013 season.  So once Thomas bumps from his current spot at nickel corner to strong safety, that could open the door for Peppers to start as a freshman and then move into a starting cornerback position as a sophomore in 2015.

As evidenced by his highlights and those statistics above, Peppers could make an impact in numerous ways. The coaches have told him that they might use him in some packages on offense (presumably at wide receiver), and he could also help the team as a punt/kickoff returner.  When talking about Peppers, comparisons to Charles Woodson – Michigan’s cornerback/receiver/returner who won the 1997 Heisman – abound.

Peppers is the tenth member of the 2014 class, which is expected to be no larger than twenty players strong.  He is also the first defensive back of a projected three; Michigan probably wants one more cornerback and a safety.  Michigan has recruited New Jersey heavily in recent years, but results have been mixed in the Garden State.  Peppers’s teammate Juwann Bushell-Beatty is an offensive tackle who committed to Michigan a few weeks ago, but before that the last few players from that state were linebacker J.B. Fitzgerald, safety/linebacker Brandon Smith, and defensive end Anthony Lalota; Fitzgerald lasted all four years but was never more than a backup, and Smith (Temple) and Lalota (Rutgers) transferred before quitting football altogether.

Bushell-Beatty was offered in February, just a couple weeks after National Signing Day.  He visited Penn State and Boston College in the meantime, and he also stopped by Ohio State on the same trip in which he visited Michigan.  After that midwest trip, he declared Michigan his leader; many presumed that he would commit to the Wolverines, but Michigan hasn’t recruited New Jersey very successfully over the past few seasons.

When watching Bushell-Beatty’s highlights, they started off well.  I think he shows some pretty impressive footwork for such a large guy, and he moves his feet very well in both the pass and run game.  He shows a nice kick set, keeps a wide base, and stays well balanced while sitting back in his pass set.  He also flashes the ability to show a good punch and control a rusher’s inside number.  He has a thick lower body, which should allow him to develop a strong power base and anchor well against inside pass rushes.

I also thought his highlight-worthy plays ran out fairly quickly.  Regarding his pass blocking, Bushell-Beatty sometimes opens up his hips and outside foot too early, which could make him susceptible to defensive ends spiking inside.  While he shows a good hand punch at times, it’s not consistent enough and he needs to work on keeping his hands inside.  In the run game, he shows decent footwork but he tends to stand up too high; despite his heft, he doesn’t appear to have the strength to drive defensive linemen off the ball.  At times he gets stoned by players who are smaller than him, partly because of pad level but also partly due to some apparent lack of functional strength.  He needs to play lower and get in the weight room.  And while several of Michigan’s recent offensive line recruits look like solid overall athletes, Bushell-Beatty is a little less so and will have to work on his balance and flexibility.

I think Bushell-Beatty projects best as a left tackle at the next level, because he has a pretty good feel for pass protection.  His run blocking needs the most work, in my opinion, so offensive guard and right tackle are a bigger leap.  He has a good deal of mass and probably doesn’t need to add weight (if he is indeed 310 lbs.), but he will need to turn some of that current weight into muscle.  I do not think he has the athleticism to be a great offensive lineman, but there is some potential for him to be a starter at some point, a guy like Mark Huyge.

Bushell-Beatty is the eighth commitment in the class of 2014 and the second offensive lineman, joining Tarpon Springs (FL) East Lake’s Mason Cole.  If the recruiting class remains at the size of 16, then I would expect Michigan to take three total linemen; the third could be a guy at any of the offensive line positions, because I think Michigan has built enough depth at every spot to take the “best player available.”  Meanwhile, Bushell-Beatty’s teammate is cornerback Jabrill Peppers, widely considered to be the best cornerback prospect in the country.  Michigan has not pulled in a player from Paramus (NJ) Catholic before, and he is the first from the Garden State since Anthony Lalota in the 2009 class.  However, Michigan did have a short run of success recruiting the state in the 2000s with guys like J.B. Fitzgerald, Victor Hobson, and Brandon Smith.

Highlights can be found on Hudl.