Bush has had quite the journey through the football world. A high school quarterback, he played linebacker initially before moving to fullback to tight end to running back. The switch to running back in 2019 was mostly because the team got rid of the fullback position, but Bush has never really been in the discussion at running back, even when there was a slew of injuries in the spring.

Nothing much should change this year. Bush will probably play special teams, and the addition of Chris Evans – who missed the 2019 season due to suspension – will keep Bush tethered to the bench when the offense is on the field. Special teams should remain Bush’s best opportunity to make his mark.

Bush, who made the switch from fullback to tight end mid-season, played in eight games on special teams and two games on offense last year. Most prominently, he played on the kickoff return unit as an upback.

This year Bush moves a little closer to playing time with the graduation of Jared Wangler and Zach Gentry. While the Wolverines are removing the fullback more and more from the equation, Bush is a good athlete who was a high school quarterback and outside linebacker. There are a lot of question marks about how fullback types will be used this season, but Bush should be in the mix behind Ben Mason and Ben Van Sumeren, with the former’s involvement on the defensive a potential wild card. 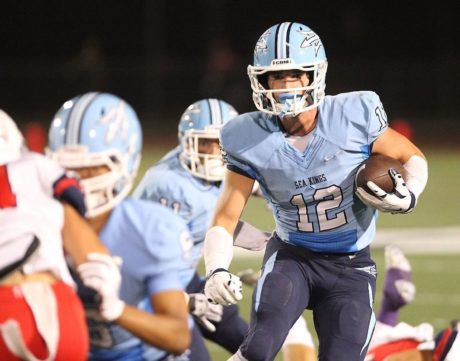 
Bush is a one-time high school quarterback who ended up catching 62 passes for 915 yards and 15 touchdowns as a senior in the 2015 season. He came to Michigan in 2016 and has been packing on weight since then. As Michigan searches for contributors at the fullback/H-back positions, I see Bush as a potential candidate for playing time. Bush is more of an H-back type, while Matt Brown (LINK) looks like more of a traditional fullback. The Wolverines have several options and fullback is a spot that can be capably manned by walk-ons, so there’s a cluster of these types of players down here toward the bottom of the countdown list.