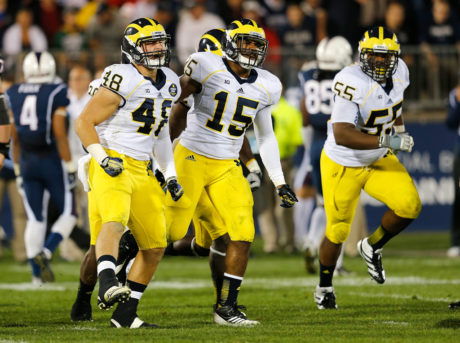 Poll results: Who will be Michigan’s leading tackler in 2013?

Prior to the season, I asked which player would lead Michigan in tackles. So far the voting has been pretty accurate for the leader, although cornerback Raymon Taylor – whom I didn’t even put on the list – is close to the lead with 44 total takedowns.


Desmond Morgan: 27%
Morgan has 47 tackles at this point.


Joe Bolden: 6%
Bolden has 23 tackles as the main backup inside linebacker.


Brennen Beyer: 1%
Beyer has made 18 tackles through seven contests.


Blake Countess: 0%
Countess is the third-leading tackler among defensive backs with 27.

Poll results: Who will be Michigan’s leading receiver?

This is a poll I took over the summer, prior to the season. Then things got busy and I didn’t have a chance to post the results.

Who do you think Michigan’s leading receiver will be in 2013? All statistics are through seven games.

Jeremy Gallon: 79%
Gallon took a pretty commanding lead with his 369-yard performance against Indiana, but as of now, he has 45 catches for 831 yards and 7 touchdowns.

Amara Darboh: 10%
Darboh suffered a foot injury shortly before the season began, has not played, and is expected to miss the rest of the year.

Devin Funchess: 3%
Funchess has 23 catches for 492 yards and 4 touchdowns. He was pushing Gallon for the lead, but now he’s 339 yards behind.

Drew Dileo: 1% (6 votes)
Dileo has 8 catches for 99 yards and 1 touchdown. I expect him to catch a few more passes down the stretch, but he’s obviously out of the running.

Jehu Chesson: 1% (5 votes)
Chesson’s 7 catches for 98 yards and 1 touchdown aren’t particularly impressive, but the physical skills are there to be a leading receiver someday. He needs to work on his hands and on adjusting to balls in the air.

Da’Mario Jones: 1% (4 votes)
Jones has yet to see time on offense, although he has played on special teams.

Joe Reynolds: 1% (4 votes)
Reynolds has 3 catches for 56 yards after being passed up for playing time by Chesson.

Csont’e York: 1% (4 votes)
York has played sparingly this season and has yet to make a catch.

Other: 0% (2 votes)
I don’t know who else might have received a vote. Maybe Dennis Norfleet’s parents stopped by to vote. 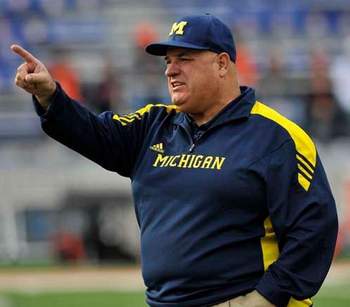 After yet another weak performance running the ball against Penn State last week, offensive coordinator Al Borges’s name started to be tossed around (if it wasn’t already) as a potential target for firing. A poll asked if readers thought Michigan would be fired before 2014, and below are your results: 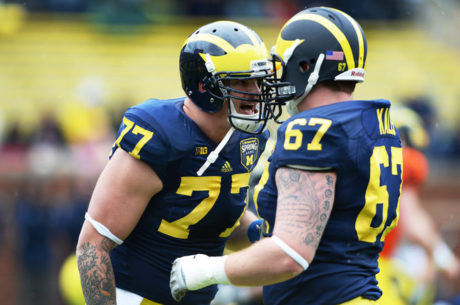 Poll results: Which three linemen should be starting on the interior?

I posted a poll asking Michigan fans which three linemen should be starting on the interior of the offensive line, and it looks like fans want a change. Voters could pick multiple answers, and here are the responses.

At this point, I would be in support of center Jack Miller being sent to the sideline if Graham Glasgow can handle snapping duties. I think sometimes people underestimate the importance of getting good snaps, so that’s a big “if.” But Miller struggles with stout nose tackles, and he just flat-out misses some obvious blocks at times.

If redshirt sophomore Chris Bryant is healthy after suffering various leg injuries over the past couple seasons, I think he should get a shot. However, Michigan has to realize the strengths of each of these players. My guess is that Bryant excels at blocking plays like power and iso, but he probably struggles with zone blocking, which requires more agility and lateral movement. If Michigan wants to continue running zone stretches to the left behind Taylor Lewan, then perhaps Kyle Kalis should flip to left guard to make that play more viable. Then the Wolverines could run outside zone, iso, and power to the left, while running power and iso to the right.

Poll results: Which position group is most concerning right now?

In the week between Akron and UConn, I posted a poll asking about the most concerning position group on the Michigan squad. The results aren’t exactly surprising, but there’s an oft-quoted mantra that “Games are won in the trenches” and Michigan fans are worried about those spots.

Offensive line: 45%
We’ll see tonight if there are any changes on the line. Some people (including me) have been beating the drum for redshirt sophomore Chris Bryant to get a look.


Defensive line: 39%
If Brennen Beyer is considered a linebacker, Michigan has exactly one sack from its defensive line, that coming from backup weakside end Mario Ojemudia.


Running back: 5%
It’s nice to see that not many people are up in arms about Fitzgerald Toussaint, but I do think there might be some concern about his backups.


Quarterback: 3%
There’s no question that Devin Gardner should be more consistent, but it would make his job easier if some other guys could step up.


Special teams: 0%
Punt returns have been a little iffy, and Matt Wile has had a couple shanked punts. Otherwise, things have been fine.