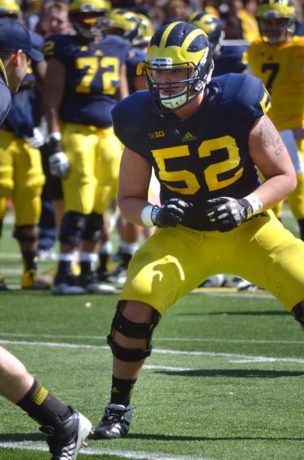 ESPN put together a freshman All-America team (LINK) that includes several names that will be familiar to Michigan fans, not only from watching college football, but also following recruiting. All four members of the secondary were recruited by Michigan. The team also includes Michigan left tackle Mason Cole, who started every game this season.

ADDED TO THE BOARD: 2014
Virginia Beach (VA) Bayside safety Quin Blanding was offered by Michigan.  Blanding is a 6’2″, 200 lb. defensive back with offers from Alabama, Auburn, Clemson, Florida, Florida State, Notre Dame, Ohio State, and Virginia Tech, among others.  As a sophomore in 2011, he had 67 tackles, 12 tackles for loss, 3 sacks, and 7 interceptions.  He was one of just a couple rising juniors to be invited to Nike’s The Opening in Eugene, OR, last July.

Chesapeake (VA) Indian River defensive tackle Andrew Brown was offered by Michigan.  Brown is a 6’4″, 282 lb. tackle with offers from Alabama, Auburn, Clemson, Florida, Georgia, Ohio State, and Virginia Tech, among others.  I’m not a big fan of Brown because he’s a showboater.  He has a lot of talent, but there’s a little too much pounding of his chest in his highlights.  I would prefer if Michigan stays away from players like this.

MISCELLANEOUS
Check out the Recruit Tracker series to see how Michigan’s 2013 recruits are doing this season.

Also, here’s a highlight film of Richmond (VA) Hermitage running back Derrick Green from the first half of the season.  I still don’t see a dynamic running back, but he does fall forward for an extra yard or two, so that’s good . . .