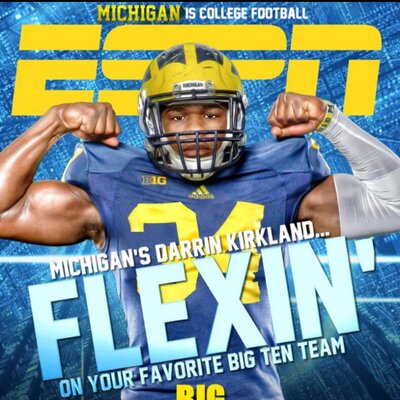 ADDED TO THE BOARD: 2015
Indianapolis (IN) Lawrence Central linebacker Darrin Kirkland, Jr. decommitted from Michigan. He committed to Michigan back in May (LINK), but the tenuous coaching situation obviously unnerved him. Michigan has a small chance to reel him back in if they hire the right guy, but players rarely re-commit. The loss of Kirkland in the class is somewhat mitigated by the combination of facts that a) Desmond Morgan is redshirting to return in 2015 and b) Michigan got a commitment from Dele’ Harding. If Notre Dame were to offer Kirkland, I would not be surprised to see him join his friend Asmar Bilal in South Bend.

ADDED TO THE BOARD: 2017
St. Joseph (MI) St. Joseph defensive end Corey Malone-Hatcher was offered by Michigan. Malone-Hatcher is a 6’3″, 227 lb. prospect with offers from Ohio State and Penn State; he has also visited Alabama, partly because his father is from the state. He claims a 5.08 forty, a 27″ vertical, a 315 lb. bench press, and a 535 lb. squat. He plays some linebacker for his high school team, but if his body continues to grow – and considering his current athletic skills – he should be a defensive end at the next level. Obviously, he’s at the end of his sophomore season, so lots of development should be expected – he’s a good athlete and a solid hitter who really needs to learn technique and how to use his hands. Right now he’s a totally raw prospect, but one of the top few players in the state for his class.


OFF THE BOARD
Evans (GA) Lakeside safety Rashad Roundtree committed to Georgia. Georgia was consistently the presumed leader, but he was also considering Ohio State, which would have been bad news for Michigan. He’s considered the #6 safety and the #95 player overall by 247’s Composite ratings.

MISCELLANEOUS
As always, check out Recruiting Season  for some updated profiles of players from within the state of Michigan. 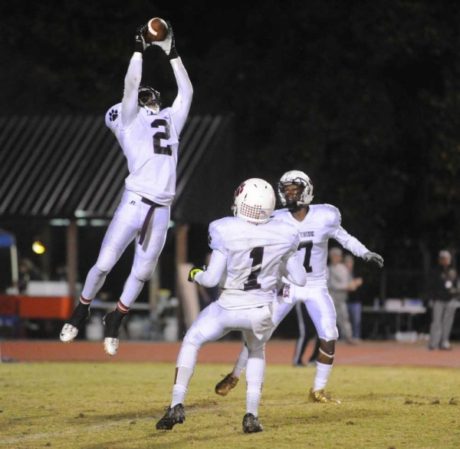 ADDED TO THE BOARD: 2013
Huh? Why does this say 2013? Well, it’s because former Michigan target Ty Isaac, a running back who spent last year at USC, is transferring closer to his hometown in Illinois. I wrote a full piece on him on Friday (LINK).

ADDED TO THE BOARD: 2015
Jacksonville (FL) Ed White cornerback Javaris Davis was offered by Michigan. You may also see him listed as “Javarius” but his Hudl profile says “Javaris,” so I’m inclined to trust that, since it’s posted by his own school. He’s a 5’9″, 175 lb. prospect with offers from Louisville, Michigan State, North Carolina, Pitt, South Florida, and Wisconsin, along with several others. He’s a 247 Composite 3-star, the #46 running back, and #588 overall. Davis could play running back at the next level, but he does not appear to fit what Michigan wants from that position; Davis is more of a small, speed guy, whereas Michigan has preferred bigger backs in recent years. The coaches weren’t specific about position and said they wanted him as an “athlete.” Because the offer went out around the same time that news broke about Shaun Crawford visiting other schools, I’m inclined to believe they see him as a potential replacement for Crawford at corner in the class.

Lithonia (GA) Hapeville defensive end Arden Key was offered by Michigan. He’s a 6’5″, 221 lb. prospect with offers from Alabama, Auburn, Clemson, Florida, Florida State, Georgia, LSU, Miami, Ole Miss, Oregon, South Carolina, and USC, among others. He’s a 247 Composite 4-star, the #10 weakside end, and #125 overall. He has a top five consisting of southern schools and Oregon, and I think it would be very difficult for Michigan to sway him.

Evans (GA) Eastlake safety Rashad Roundtree was offered by Michigan. He’s a 6’1″, 195 lb. prospect with offers from Alabama, Auburn, Clemson, Florida, Florida State, Georgia, Ohio State, and several others. He’s a 247 Composite 4-star, the #6 safety, and #63 overall for 2015. Roundtree (no relation to former Michigan receiver Roy Roundtree, as far as I know) claims a 4.65 forty and is a big hitter with good ball skills. Georgia is far and away the leader, so I expect to see him become a Bulldog sooner or later.

Coppell (TX) Coppell offensive lineman Connor Williams was offered by Michigan. He’s a 6’5″, 275 lb. prospect with offers from Arkansas, Missouri, Nebraska, Oklahoma, Oregon, and UCLA, along with several others. He’s a 247 Composite 3-star, the #8 center, and #609 overall. Williams is a very interesting prospect because, based on his junior film, I think he could play any position on the line, including tight end. I don’t know that I’ve been able to say that about any other prospects. He plays tight end in high school and has the quickness to play the position, albeit as a blocking sort. He also has the feet to play tackle, the quickness to play center, and the pad level to be effective at center or guard. Of course, that doesn’t mean he will be great at any or all of those positions, but the versatility is impressive. Williams immediately placed Michigan his top five but has not made plans to visit. If his high school sounds familiar, he was the teammate of 2014 defensive end Solomon Thomas (Stanford), whom Michigan also recruited.

This is a long update, so hit the jump for 2016 and 2017 prospects, along with miscellaneous tidbits.

ADDED TO THE BOARD: 2016
Cincinnati (OH) Moeller tight end Jake Hausmann was offered by Michigan. He’s a 6’5″, 230 lb. prospect with offers from Cincinnati, Florida State, Kentucky, Louisville, Ohio State, Penn State, and Tennessee, along with several others. He’s a 247 Sports 4-star, the #6 tight end, and #183 overall. Hausmann’s parents went to Ohio State, his sister is a sophomore Buckeye, and former teammate Sam Hubbard – who also held a Michigan offer – is headed to Columbus. Odds are that he ends up wearing scarlet and gray.

Suwanee (GA) North Gwinnett wide receiver Josh Imatorbhebhe was offered by Michigan. He’s a 6’2″, 202 lb. prospect with offers from Kentucky, Missouri, Nebraska, and Vanderbilt, along with a couple others. He’s a 247 Sports 4-star, the #36 wide receiver, and #211 overall. Imatorbhebhe has a 4.1 grade point average and is attracted to the Wolverines in part because of the academic reputation, which is the same reason Vanderbilt is on his radar.

San Jose (CA) Valley Christian wide receiver Collin Johnson was offered by Michigan. He’s a 6’4″, 180 lb. prospect who committed to Texas approximately a month ago; he also has offers from Oregon State, TCU, and USC, among others. He’s a 247 Sports 4-star, the #16 wide receiver, and #85 overall.  Johnson isn’t particularly fast, but he has good leaping ability, body control, and hands.

Killeen (TX) Shoemaker defensive tackle Kendell Jones was offered by Michigan. He’s a 6’4″, 295 lb. prospect with offers from Arkansas, Baylor, Oklahoma, Texas, and Texas A&M. He’s a 247 Sports 5-star, the #5 defensive tackle, and #21 overall. As a sophomore in 2013, he had 22 tackles, 9 tackles for loss, and 3 sacks. I expected to see more quickness out of Jones, but he mainly looks like a space eating nose tackle.

Cleveland (OH) Benedictine wide receiver Justin Layne was offered by Michigan. He’s a 6’3″, 173 lb. prospect with offers from Miami, Michigan State, Pitt, and West Virginia. He’s a 247 Sports 4-star, the #18 wide receiver, and #88 overall. (Is it stupid to anyone else that there are 18 wide receivers among the top 88 players in the country? That’s roughly the same number of scholarships on a football team, so imagine having 17 or 18 wideouts on one team.) Layne is a teammate of 2015 linebacker Jerome Baker, whom Michigan is recruiting but will likely end up elsewhere, probably at Ohio State. While Baker has had several visits fall through, Layne is planning to visit Michigan for a basketball camp in early June.

Fort Worth (TX) All Saints Episcopal defensive tackle Michael Williams was offered by Michigan. He’s a 6’2″, 290 lb. prospect with offers from Kansas State, Oklahoma State, and UCLA, among others. As a sophomore in 2013, he made 60 tackles, 8 tackles for loss, 1 sack, 2 pass breakups, and 1 forced fumble. Williams is a little quicker than Jones but not as powerful.

ADDED TO THE BOARD: 2017
Orlando (FL) Dr. Phillips offensive tackle Calvin Ashley was offered by Michigan. He was offered in April but it only came out recently. He’s a 6’7″, 260 lb. prospect with offers from Clemson, Florida State, Louisville, Miami, Ole Miss, and South Carolina, among others. In case you don’t remember, Michigan recruited Dr. Phillips heavily in the Rodriguez years when they pursued Ha Ha Clinton-Dix (Alabama), Demetrius Hart (Alabama), LaQuentin Smith (Pitt), and Kenny Shaw (Florida State), plus Ricardo Miller, who transferred to Ann Arbor (MI) Pioneer for his senior year, attended Michigan, and then transferred to UMass.

Here’s a list of players Michigan has been visiting this month (LINK).

Here’s a bit on Darrin Kirkland, Jr., who visited Michigan this weekend (LINK).