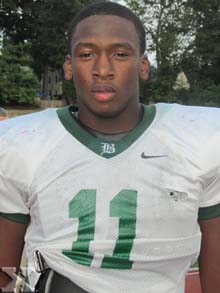 ADDED TO THE BOARD: 2015
Richmond (VA) Benedictine defensive end Clelin Ferrell was offered by Michigan. He’s a 6’5″, 225 lb. prospect with offers from Clemson, Miami, Ohio State, Penn State, Virginia, and Virginia Tech, among others. He’s a 247 Composite 4-star, the #6 weakside end, and #76 overall. As a sophomore in 2012, he had 60 tackles, 26 tackles for loss, and 11.5 sacks. He plays some linebacker, but he looks like a future weakside end and shows nice burst off the edge. Ferrell is teammates with 2016 wide receiver offeree Scott Bracey and plays in the same league as Michigan freshman quarterback Wilton Speight.

Gardena (CA) Junipero Serra defensive tackle Rasheem Green was offered by Michigan. He’s a 6’5″, 280 lb. prospect with offers from Alabama, Florida, Florida State, Miami, Notre Dame, UCLA, and USC, among others. He’s a 247 Composite 5-star, the #6 defensive tackle, and #17 overall. Michigan went after two of Green’s teammates in the 2014 class, but came away empty on cornerback Adoree’ Jackson (USC) and linebacker Dwight Williams (UCLA). The favorite for Green appears to be USC, too.

ADDED TO THE BOARD: 2016
Cleveland (OH) St. Ignatius offensive guard Liam Eichenberg was offered by Michigan. He’s a 6’5″, 275 lb. prospect whose only other offer is from Ohio State. Eichenberg has stated that he is very likely to stay in the Big Ten. Fifth year senior linebacker Jake Ryan is also from St. Ignatius.

ADDED TO THE BOARD: 2017
Miamisburg (OH) Miamisburg offensive tackle Josh Myers was offered by Michigan. He’s a 6’5″, 255 lb. prospect with offers from Illinois, Indiana, and Kentucky. Myers represents the Wolverines’ first offer in the 2017 class. He has a brother who’s a redshirt sophomore center at Kentucky and a father who played for the Wildcats, so they’re a major player in his recruitment. Of course, as a member of the 2017 recruiting class, his brother will be graduated from UK before Josh arrives.

OFF THE BOARD
Warminster (PA) Archbihop Wood offensive tackle Ryan Bates committed to Penn State. He was just offered by the Wolverine a couple weeks ago and is the #166 player in the class, according to the 247 Composite.

Gaithersburg (MD) Gaithersburg athlete Kamonte Carter committed to Penn State, too. Along with Bates and a defensive back named Jarvis Miller, they became the first three commitments in the 2015 class for the Nittany Lions. Before this past weekend’s Junior Day in Happy Valley, Carter previously visited PSU for their overtime win against Michigan, so that had to be a positive game day experience. Carter is a do-it-all high school player, the rare quarterback/defensive end combo. Michigan originally offered him as a SAM linebacker, but at 6’4″ and 235 lbs. already, he will likely be a defensive end at the next level.

Virginia Beach (VA) Ocean Lakes athlete Jaason Lewis committed to UCLA. Lewis plays a little bit of everything for his high school team, but at 6’3″ and 235 lbs., I have doubts about whether he can stick at wide receiver, which is where some people project him. He looks more like an H-back to me, or perhaps a linebacker. It will be interesting to see how UCLA uses him, and they’re not averse to playing players at multiple positions, as they showed with Myles Jack.


MISCELLANEOUS
Here’s a list of the 2015, 2016, and 2017 visitors who were on campus Saturday to watch Michigan play Wisconsin.

Lakewood (OH) St. Edward cornerback and current prize of Michigan’s 2015 recruiting class Shaun Crawford went to the Nike camp this past weekend, ran a laser-time 4.5 forty, ran a 4.03 shuttle, jumped 36.3″ vertically, and earned an invite to The Opening.