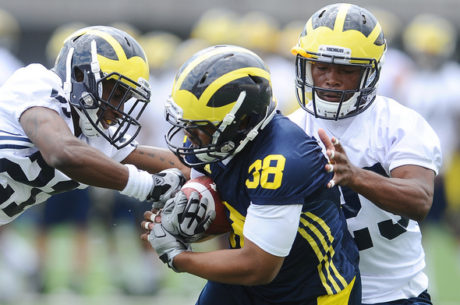 Soon-to-be senior running back Thomas Rawls will not be a senior at the University of Michigan. He has decided to transfer to Central Michigan, which is something that I’ve quietly been suggesting for a while.

Rawls was a late addition the 2011 recruiting class, needing some late academic success to propel him toward a scholarship at Michigan. He was probably headed to CMU if not for the offer to play in Ann Arbor, so this development is approximately three years in the making. My commitment post from February 2011 suggested that Rawls would be in over his head a little bit in the Big Ten, and I gave him a TTB Rating of 68. I always believe that Rawls was too slow and lacked elusiveness, and he didn’t break as many tackles as a 5’10”, 217 lb. running back should.

Rawls played sparingly during his three seasons as a Wolverine behind a variety of mediocre-performing running backs like Fitzgerald Toussaint (who did have a good year in 2011), Vincent Smith, Derrick Green, and De’Veon Smith, among others. His most productive season was as a sophomore in 2012 when he had 57 carries for 242 yards (4.2 yards/carry) and 4 touchdowns; that year included his career highlight, a 63-yard touchdown run late in a blowout win over Illinois. This past season, he had 3 carries for 12 yards and 1 touchdown in the season opener against his future team, but he never saw another snap again at running back and was relegated to special teams duty. He finished his Michigan career with 73 carries for 333 yards (4.6 yards/carry) and 5 touchdowns, plus 1 catch for 6 yards.

This leaves Michigan with four tailbacks on the roster for 2014: redshirt junior Justice Hayes, redshirt sophomore Drake Johnson, and sophomores Derrick Green and De’Veon Smith. The Wolverines have recently sent out offers to Sarasota (FL) Booker’s Marlon Mack and Minneapolis (MN) Washburn’s Jeff Jones, but neither appears to be even planning to visit Michigan, even though Mack decommitted from UCLA as soon as the Wolverines offered him. It would appear to make sense for Michigan to grab a running back before National Signing Day in a couple weeks, but things are quiet on that front right now. The last time Michigan skimped on an important position in a recruiting cycle, they didn’t take a quarterback in the 2012 class, which left them in a bind when Denard Robinson and Russell Bellomy got injured at various points. 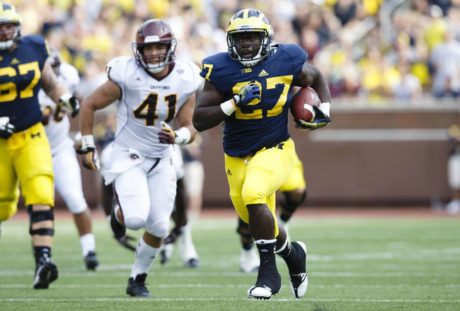 Poll results: Who will lead the team in carries in 2014?

I may present this poll again closer to the season, because a new offensive coordinator will mean a different philosophy and perhaps some different personnel. But in the meantime, before Al Borges was let go, I asked which running back would get the most carries in 2014. What you said:

Derrick Green (So.): 60%
Green had 83 carries for 270 yards (3.3 yards/carry) and 2 touchdowns in 2013. Green showed pretty good speed and fell forward after contact, but he didn’t break many tackles or show a lot of wiggle. Of course, nobody should have expected a 6’0″, 230 lb. running back to show much wiggle. He did start off the year heavier than he should have been, which may have diminished his effectiveness. New offensive coordinator Doug Nussmeier and his fellow Alabama staff members recruited Green to Tuscaloosa, so it would make sense that Nussmeier has an eye toward Green being his horse.


De’Veon Smith (So.): 30%
Smith had 26 carries for 117 yards (4.5 yards/carry) as a freshman. After not playing much early in the year, something got sparked in him during the last few weeks of the regular season, when he totaled 15 carries for 98 yards (6.5 yards/carry) against Northwestern and Ohio State. Smith is a more violent runner than Green, but his speed leaves something to be desired.


Drake Johnson (RS So.): 3%
Johnson had 2 carries for 9 yards before tearing his ACL in the season opener against Central Michigan. Up until that point, he had been listed as Michigan’s #2 tailback. An accomplished high school track athlete, Johnson’s main claim for playing time was based on his speed. The fact that he tore the ACL in late August means he should be almost back to full speed by the time the 2014 season rolls around, but sometimes it takes a couple years for guys to totally recover.


Other: 2%
This could refer to junior Dennis Norfleet, who moved to slot receiver; or redshirt freshman tailback/fullback Wyatt Shallman, who looks like an H-back to me; a freshman like Jeff Jones or Vic Enwere, neither of whom have committed to Michigan; or perhaps quarterback Devin Gardner. If you gave me all of their carries combined, I would still bet on one of the other guys.


Justice Hayes (RS Jr.): 1%
Hayes had 2 carries for 6 yards on the season, but by golly, he was the starting running back against Kansas State in the Buffalo Wild Wings Bowl. The best thing Hayes has going for him is some decent speed, but he doesn’t have the greatest vision or tackle breaking ability. He was even reported to be moving to slot receiver before injuries and ineffectiveness forced him back to running back.


Thomas Rawls (Sr.): 0%
Rawls had 3 carries for 12 yards and 1 touchdown, all of which came against Central Michigan in the season opener. He played some special teams after that, but you wouldn’t really have known he played at all unless you checked the participation reports after the games. There have been rumors that he will not return to the football team in 2014.

Poll results: Who will lead Michigan in rushing for 2013?

It’s not the most timely thing, but I set up a bunch of polls during the summer and never “released” the results. It’s still early enough in the year to be relevant, though, so I’ll be kicking out some posts about predictions for the year. Today’s question: Who will lead Michigan in rushing?

Fitzgerald Toussaint: 52%
Fifth year senior Toussaint was the obvious choice, since he was a two-year starter coming into 2013. Unfortunately, a broken leg last fall put his status into question. He had 57 yards in the opener against Central Michigan.

Derrick Green: 40%
True freshman Green got more votes than I thought he would, but maybe it was warranted after a 58-yard debut against the Chippewas. After being listed near the bottom of the depth chart for week one (perhaps due to a sprained ankle he suffered at the beginning of August practices), he’s the #2 guy going into Notre Dame.

DeVeon Smith: 1%
Smith, another true freshman, had just 12 yards against the Chips. In my opinion, he does not have the speed to be a dynamic back, but injuries have felled Toussaint frequently, so there’s a chance; unfortunately, that chance probably would involve bad things happening to the guys ahead of him.

Drake Johnson: 1%
There’s no chance for redshirt freshman Johnson, who tore his ACL early in the season opener. He’ll finish the year with 2 carries for 9 yards.

Thomas Rawls: 1%
Rawls, a junior, had 4 carries for 12 yards in the opener. He looks quicker than he did last season, but he’s still pretty low on the depth chart after a couple uninspiring years.

Devin Gardner: 0%
Sacks will probably prevent fifth year senior Gardner from having a real shot at leading the team in rushing. He has the speed to turn broken plays into big runs (or passes), but his 52 yards against Central Michigan were largely a function of CMU’s inability to hem him in. More athletic teams probably won’t struggle quite as much, although Gardner will get his share of yardage.

Dennis Norfleet/Other: 0%
Sophomore Norfleet had 38 yards on a reverse last week, but as a slot receiver, he won’t get a ton of opportunities.

Justice Hayes: 0%
Redshirt sophomore Hayes has been near the bottom of the depth chart for his entire career, and that seems not to have changed. He was the last running back to get a carry against Central, and his lone rush netted him 7 yards. 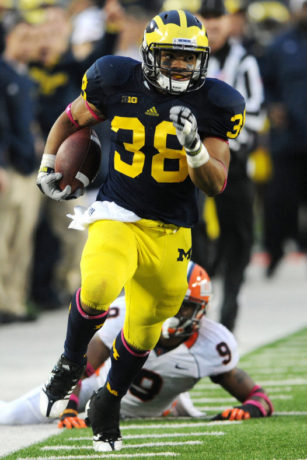 Name: Thomas Rawls
Height: 5’10”
Weight: 217 lbs.
High school: Flint (MI) Northern
Position: Running back
Class: Junior
Jersey number: #38
Last year: I ranked Rawls #18 and said he would be a part-time starter. He started one game and had 57 carries for 242 yards and 4 touchdowns.

I made a mistake and ranked Rawls too high last year. I decided to believe Fred Jackson, and I will never, ever, ever do that again. In 2012 Rawls looked like the guy I thought he was coming out of high school. He doesn’t break tackles the way someone his size should, and he doesn’t have breakaway speed. However, he did have good games against Illinois (9 carries for 90 yards, including a 63-yard touchdown), Purdue, and UMass, for whatever those accomplishments are worth.

Rawls has now had two years to prove himself a capable runner, and he has yet to do so. Whenever starter Fitzgerald Toussaint returns to health, I think Rawls will find himself #3 on the depth chart behind Toussaint and freshman Derrick Green. Rawls might have some value as a backup fullback, but he does not appear to be starter material. Former 5-star Kevin Grady followed a similar career path from failed tailback to fullback, and while I’m not totally writing Rawls off from contention for backup duty at tailback, I just think there are better guys in the pipeline.

MICHIGAN
Starter: Redshirt junior Fitzgerald Toussaint, a two-year starter, broke his leg against Iowa and will miss the bowl game.  The person who should start at the running back is senior Denard Robinson (6’0″, 197 lbs.), even if he is able to throw the ball a little.  Robinson has run the ball 154 times for 1,166 yards this season (7.6 yards/carry) and scored 7 touchdowns.  In the two games since returning from his elbow injury, he has played a good deal of running back and totaled 220 yards on 23 carries (9.6 yards/carry) and 1 touchdown.  Redshirt freshman Joe Kerridge (6’0″, 244 lbs.) starts at fullback but rarely touches the ball, notching just 1 reception for 12 yards on the season.
Backups: Sophomore Thomas Rawls (5’10”, 218 lbs.) has been the main backup to Toussaint throughout the year.  He carried the ball 57 times for 242 yards (4.2 yards/carry) and 4 touchdowns.  He lacks some speed and vision, and he doesn’t run as physically as one would expect from a back with his heft.  Senior Vincent Smith (5’6″, 175 lbs.) has been forced into action in situations that don’t fit his skills; he has carried the ball 32 times for 88 yards (2.8 yards/carry) and 2 touchdowns.  His biggest strength is as a receiver out of the backfield, where he has caught 9 passes for 65 yards and 1 touchdown.  Little used redshirt freshman Justice Hayes (5’10”, 183 lbs.) amassed 83 yards on 16 carries (5.2 yards/carry) and 1 touchdown in blowout wins over Illinois and UMass.

SOUTH CAROLINA
Starter: Much like Michigan, South Carolina will be missing its starting tailback (junior Marcus Lattimore, who has decided to leave early for the NFL Draft) due to a leg injury.  I have always thought Lattimore was overrated as a college running back, but he was the best the Gamecocks had.  His absence leaves the job to fifth year senior Kenny Miles (5’9″, 193 lbs.), who ran the ball 99 times for 358 yards (3.6 yards/carry) and 2 touchdowns.  He also has 16 receptions for 168 yards (10.5 yards/reception), so he’s a threat out of the backfield, too.
Backups: Freshman Mike Davis (5’9″, 216 lbs.) has been very effective for a third-stringer with 52 carries for 275 yards (5.3 yards/carry) and 2 touchdowns.  No other player has notched more than 5 carries this season.

THE TAKEAWAY
The true running backs on these two teams are not very impressive.  Nobody on Michigan’s team seems to have much of a chance to turn into a star, and the best prospect on either squad appears to be Gamecocks freshman Davis.  However, the most dynamic player is converted quarterback Robinson, who has the ability to break a big run at any given time.
Advantage: Michigan