Lots of people look at Tom Brady as a college player or in pictures or video from the NFL Combine (see below), and they laugh at the scrawny guy who looks like an un-athletic tenth grader running through agility drills. The thing that people often forget is that when he played quarterback for Michigan and when he was going through QB-specific drills, he actually looked pretty darn good. It was only when asked to run around cones and run 40 yards in a straight line when he looked particularly awkward. It just goes to show that you don’t have to be a great all-around athlete to be a professional athlete. I don’t want to watch C.C. Sabathia run the 40-yard dash or see B.J. Raji throw a curveball, but they’re both good at what they do.

New England Patriots quarterback Tom Brady was 28/44 for 317 yards and 2 touchdowns in a 23-14 victory over the San Diego Chargers.

Honorable mention: New York Jet David Harris had 9 tackles and 1 tackle for loss in a 30-24 loss to the Minnesota Vikings. Jacksonville Jaguars running back Denard Robinson had 10 carries for 30 yards before suffering a foot sprain that will cause him to miss the final three games of the season; the Jaguars lost to the Houston Texas, 27-13. Oakland Raider Charles Woodson made 8 tackles, 1 interception, and 1 pass breakup in a 24-13 win over Jim Harbaugh’s San Francisco 49ers. 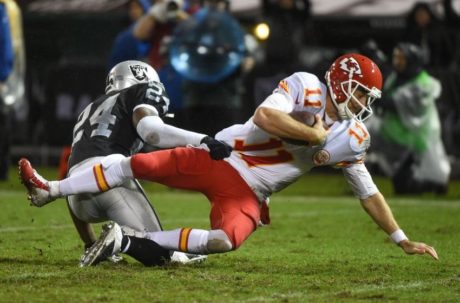 Charles Woodson made 8 tackles, 3 tackles for loss, 1 sack, and 1 quarterback hurry in the Oakland Raiders’ 24-20 win over the Kansas City Chiefs. He also returned 1 punt for 5 yards.

Honorable mention: Tom Brady was 38/53 for 349 yards, 2 touchdowns, and 1 interception in the New England Patriots’ 34-9 win over the Detroit Lions. Chicago Bears safety Ryan Mundy made 8 tackles, 1 interception, and 1 pass breakup in a 21-13 win over the Minnesota Vikings.

Houston Texans quarterback Ryan Mallett didn’t have a good week, but I thought it would be worth mentioning that after going 21/45 for 189 yards and 1 pick in a 22-13 loss to the Cleveland Browns, he was diagnosed with a torn pec and will miss the rest of the season. That was his second career start after being acquired from the Patriots, an unfortunate turn of events for the former Wolverine (and Arkansas Razorback). 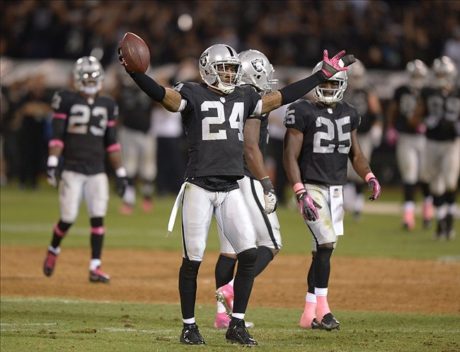 Charles Woodson had a game-high 14 tackles, but his Oakland Raiders lost to the San Diego Chargers by a score of 13-6.

Honorable mention: New England Patriots quarterback Tom Brady was 19/30 for 257 yards, 2 touchdowns, and 2 interceptions in a 42-20 win over the Indianapolis Colts. Ryan Mundy made 1 tackle and 1 interception in the Chicago Bears’ 21-13 win over the Minnesota Vikings. 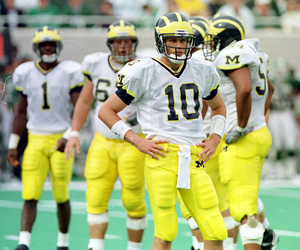 Tom Brady was 33/53 against the Denver Broncos for 333 yards, 4 touchdowns, and 1 interception in a 43-21 win. This season he is completing 64% of his passes for 22 touchdowns and just 3 interceptions.

Honorable mention: Jacksonville Jaguars running back Denard Robinson carried the ball 17 times for 94 yards and 1 touchdown, and added 2 catches for 10 yards in a 33-23 loss to the Cincinnati Bengals. Robinson has the second-most rushing yards in the NFL over the past three weeks, behind only Dallas’s DeMarco Murray. Robinson is averaging 5.0 yards/carry on the year and has scored 2 touchdowns.

It was a pretty weak week for former Wolverines.