The seniors played like crap. I said this on Twitter, and someone responded saying they’re looking forward to the seniors moving on. I wouldn’t go that far, but I was very disappointed in their lack of poise. I was reminded of Shawn Crable hitting Troy Smith late out of bounds…and that reminder came numerous times. Why did senior captain Carlo Kemp untie Dobbins’s shoe? 15 yards. Why did senior captain Khaleke Hudson jump offsides on a 4th-and-4 Ohio State punt? 5 yards and a first down. Why did Hudson not keep outside contain when OSU got under center and ran the ball at him? Huge gains, one of which was a touchdown. Why did senior quarterback Shea Patterson keep trying to run outside instead of cutting up to follow his blockers? -3 yards each time. Why did senior Josh Metellus decide not to play his deep half in cover 2? Touchdown. These were major gaffes. It annoys me that Cam McGrone hit Justin Fields out of bounds when Fields was already losing yards, but at least McGrone is just a young guy who’s only been starting for less than a full season. The seniors have no excuse.

I know I will take a fair amount of criticism for this one, so let me jump right into my defense:

Michigan ain’t got no big guys.

That’s a bit of a lie, because there are some large human beings on the team. Michael Onwenu, Ben Bredeson, and others are large homo sapiens, but they play offense. And the Wolverines have a couple big freshmen interior defensive linemen (Mazi Smith, Chris Hinton), but they’ve never played college football before. Jeter is listed at 290 lbs. but he’s reportedly well above 300 now.

Michigan had an excellent run defense in 2015. They allowed fewer than 4.0 yards per carry in each of the first six games, fewer than 3.0 in five of those, and few than 2.0 in four of those. The rushing averages in the final four games of the season after Glasgow disappeared?

That big, fat “6.83” is one of the primary reasons redshirt sophomore Donovan Jeter, who has yet to do much in his college career, is all the way up here at 1B. When I look at the hype for Michigan – with discussions of winning the Big Ten, going to the College Football Playoff – I don’t see them being able to overcome big hurdles like Wisconsin and Ohio State without Jeter.

Can Michigan win some games without Jeter? Sure. They have some young, touted defensive linemen, and they have some defensive ends who are capable of stopping the run. But 6’2″, 282 lb. Michael Dwumfour isn’t going to become a run-stopper overnight, and the freshman combo of Mazi Smith and Chris Hinton aren’t going to turn into stars overnight. Otherwise, Michigan has blue-collar Carlo Kemp and a converted fullback in Ben Mason. If Michigan wants to avoid getting exposed up the middle by Paul Chryst and Ryan Day, Jeter needs to play and play well. He could be the difference between a 9- or 10-win season . . . and an 11- or 12-win season. 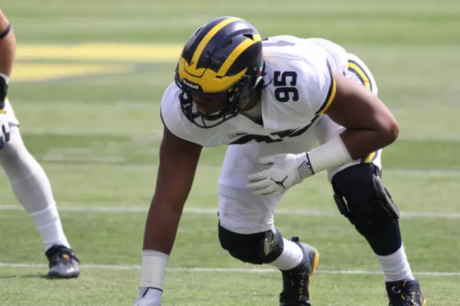 Donovan Jeter (image via The Wolverine)

Jeter earned quite a bit of hype going into last season as a potential contributor. He was playing some weakside end at one point, which never made a lot of sense to me. Regardless, his diet and the S&C program kicked in, and it turned out he was too big for weakside end. They moved him to 3-tech defensive tackle, and then he hurt his knee, anyway. So 2017 was a wash.

Jeter was expected to be a rotation player last year, so I expect him to be in that discussion this year, too. Michael Dwumfour is the expected starter at 3-tech, and Jeter is in the mix with Lawrence Marshall to back him up. Marshall is a fifth year senior who has to make an impact, while Jeter has higher upside. If he can stay healthy, I think Jeter will start taking more and more snaps away from Marshall throughout the season. 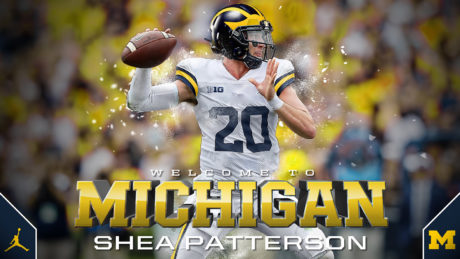 Going into the beginning of spring practice, there are lots of questions about the 2018 team. Some are obvious. Some, maybe not so much. Here are the top five things I’ll be looking for throughout the spring.

1. What will the offense look like?
Michigan’s offense was, to be kind, largely ineffective in 2017. Offensive line coach and run game coordinator Tim Drevno was nudged out the door, and he was replaced by a combination of former Ohio State/Minnesota offensive line coach Ed Warinner and former Florida head coach/Alabama offensive coordinator Jim McElwain. Furthermore, offensive tackle/tight ends coach Greg Frey left for Florida State and was replaced by Central Michigan’s Sherrone Moore. Moore won’t change the look of the offense. Warinner might switch things up a little bit, depending on what types of bodies he wants on the offensive line. McElwain is the key here. He’s not known as an innovator, but will Michigan be in shotgun? Pistol? Will the use of the fullback be dialed back a bit? Will he pack it in with multiple tight end sets, or will he spread it out more?

Hit the jump for four more questions about the spring.

END_OF_DOCUMENT_TOKEN_TO_BE_REPLACED 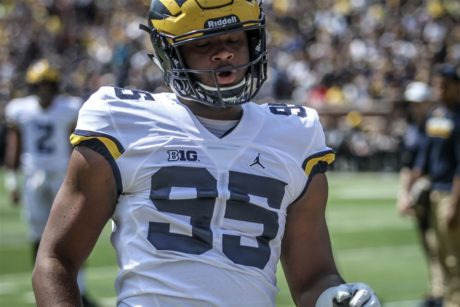 Jeter enrolled early this past January, and he made a bit of a splash during spring practices. He earned some positive reviews, and he played a good deal in the spring game. Despite my previous assertions that he looked like a future defensive tackle, he played defensive end and looked rather svelte. I suspect that he will continue to bulk up, and I still think there’s a good chance that he will end up as a 3-tech defensive tackle. However, for now he appears to be a depth player on the edge. I don’t think he’s strong enough to hold up at the point of attack, and he doesn’t offer a great pass rush right now. He may play as a developmental guy this season, but I don’t think he will have a great impact on the field.