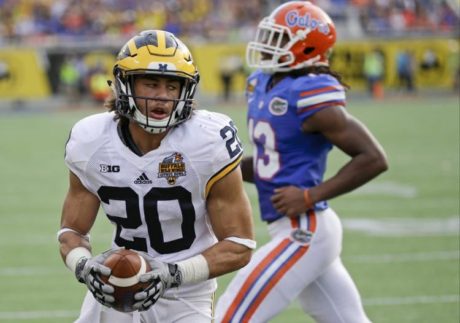 Fifth year senior running back Drake Johnson – who would be a sixth year senior in the fall – has chosen not to return to the football team, according to Jim Harbaugh. Johnson suffered from a variety of injuries during his Michigan career, including two torn ACLs and a forklift imprint.

I will post a senior profile on him (such as the one on De’Veon Smith that’s scheduled for tomorrow morning), so I won’t spend too much time here looking back at Johnson’s career. However, if he had returned, he would have been expected to be a contributor in the backfield, though not likely a starter.

This doesn’t affect Michigan’s 2018 class since Johnson was scheduled to graduate anyway, but with just 84 scholarship players headed into the fall (LINK), this opens up a place for a potential grad-transfer or a walk-on to get a scholarship. Safety/linebacker Jordan Glasgow, linebacker Michael Wroblewski, and long-snapper Andrew Robinson are a few of the leading candidates to earn a scholarship.

Name: Drake Johnson
Height: 6’1″
Weight: 201 lbs.
High school: Ann Arbor (MI) Pioneer
Position: Running back
Class: Fifth year senior
Jersey number: #20
Last year: I ranked Johnson #50 and said he would be a backup running back (LINK). He had 54 carries for 271 yards (5.0 yards/carry) and 4 touchdowns, along with 6 catches for 96 yards and 2 touchdowns.

Johnson has had a tough career so far, and you have to admire his mental fortitude. He tore his ACL after just 2 rushing attempts as a redshirt freshman. Then he suffered another ACL tear in the final game of 2014. This summer he was run over by a forklift while stretching at the indoor track facility. If Michigan and/or Johnson gets a national stage, you can imagine ESPN or a 30-for-30 making a big deal about these things. In between all those things, he has been a pretty good running back. After sitting out the opener last season while coming back from that second ACL tear, Johnson became more and more of an integral part of Michigan’s offense. He reached a season-high in carries and yardage against Maryland with 13 and 68, respectively, and added on a 31-yard touchdown catch-and-run. His usage after that was a bit odd. Perhaps it was coincidental, but against the top teams on the schedule, Johnson – the #2 back – would almost disappear at times. He didn’t play against #17 Utah, had 2 carries against #23 Northwestern, didn’t touch the ball against MSU or PSU, and notched just 2 touches (1 carry, 1 catch) against Ohio State. In those games against tough defensive fronts, the carries tended to go to starter De’Veon Smith (for obvious reasons) and combo fullback/tailback Sione Houma (13 carries, 64 yards, 3 TD’s in those games). Johnson did cap his season with an impressive game against Florida (6 carries for 58 yards, along with 2 catches for 10 yards, 2 total TD’s), but that was a 41-7 blowout win over a team that didn’t care.

I don’t know what to expect from Johnson this season. On the one hand, he was mostly productive when called upon. On the other hand, Jim Harbaugh and Co. didn’t want him out there much at crunch time. Without Sione Houma to suck up some of those carries, it will be interesting to see whether Johnson gets more opportunities, or if the coaching staff tries to involve Ty Isaac or the younger backs. Either way, we’ve seen that Michigan can do well without major contributions from Isaac, but we haven’t really seen that without Johnson. For being 6’1″, he’s pretty thin at 201 lbs. He’s not a great blocker or between-the-tackles runner, but he can catch screens and work off-tackle. He forms a nice complement to Smith’s bruising running style, so I expect Johnson to play quite a bit. Smith gives and takes a beating, so if he hurts an ankle or a shoulder, will it be Johnson or someone else who steps in to take the bulk of the touches?

Prediction: Backup running back; 60 carries for 300 yards and 5 touchdowns; 10 catches for 120 yards and 2 touchdowns

END_OF_DOCUMENT_TOKEN_TO_BE_REPLACED 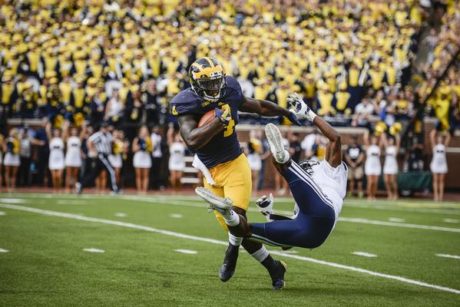 Projected RB starter: Senior De’Veon Smith. Smith is not the most dynamic back, but he does possess the toughness Jim Harbaugh wants in a running back. Last season he led the team in rushing yards (753) and touchdowns (6), despite having the lowest yards per carry on the team (4.18). However, he did end the season on a strong note with 25 carries for 109 yards against a pretty good Florida defense.

Departures: Rising senior Derrick Green decided to transfer, although his destination is not yet known. Florida is one possibility, where former Michigan offensive coordinator holds the same position. Green was the team’s sixth-leading rusher last season. Redshirt junior Ross Taylor-Douglas managed just 1.8 yards/carry last year and announced that he would be transferring to Rutgers.

END_OF_DOCUMENT_TOKEN_TO_BE_REPLACED

Let’s see more of this guy on offense . . . Drake Johnson. Much like last year, it seems like Drake Johnson (10 carries, 55 yards) is the only guy who can infuse life into the running game right now. For whatever reason, Ty Isaac and Karan Higdon did not participate in Saturday’s game, and Derrick Green (3 carries, 4 yards) is still just a guy. Meanwhile, starter De’Veon Smith (9 carries, 16 yards) is just limping along at this point. I’m unimpressed with Michigan’s options at the position, but there isn’t anyone new coming through the door just yet.