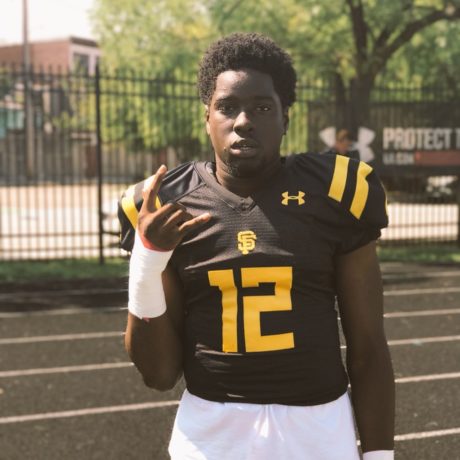 Here’s a post that has been sitting here as a draft for a few weeks, with a couple more recent updates.

New Caney (TX) New Caney cornerback Dwight McGlothern was offered by Michigan. He’s a 6’1″, 161 lb. prospect with offers from Alabama, Georgia, LSU, Ohio State, and Oregon, among others. He had 30 tackles, 4 interceptions, and 12 pass breakups as a freshman on varsity in 2016.

Baltimore (MD) St. Frances running back Osman Savage was offered by Michigan. He’s a 6’2″, 225 lb. jumbo running back with offers from Maryland and Syracuse. He’s a teammate of Braswell (see above). Savage could also end up at linebacker.

Franklin (TN) Franklin offensive tackle Jake Wray was offered by Michigan. He’s a 6’5″, 290 lb. prospect with offers from Alabama, Florida, Georgia, LSU, Notre Dame, Ohio State, and Tennessee, among others. He’s a 247 Sports 4-star, the #10 offensive tackle, and #98 overall. He visited Michigan for the game against Minnesota last weekend.