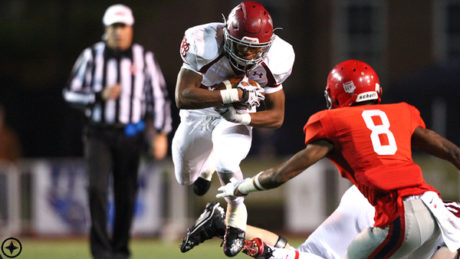 Thanks to reader ATB for the generous donation a few days ago! I haven’t really mentioned it recently, but there is a Paypal button near the bottom of the right sidebar if you’re ever looking to contribute. Also, get your friends and family members to follow me on Twitter (LINK) or like the site’s Facebook page (LINK).

ADDED TO THE BOARD: 2017
Baton Rouge (LA) Southern Lab defensive end Chris Allen was offered by Michigan. He’s a 6’4″, 222 lb. prospect with offers from Alabama, Auburn, Florida State, Georgia, and LSU, among others. He’s a 247 Composite 4-star, the #7 outside linebacker, and #91 overall. Allen plays middle linebacker in high school, which isn’t a bad idea because he’s their best defender and he can roam around the field from there. But he will probably grow into a pass rushing outside linebacker or maybe a defensive end at the next level. LSU is the heavy favorite.

Nashville (TN) Montgomery Bell running back Tykevius “Ty” Chandler was offered by Michigan. He’s a 5’11”, 190 lb. prospect with offers from Auburn, Florida, Georgia, Notre Dame, Ohio State, and Tennessee, among others. He’s a 247 Composite 4-star, the #4 running back, and #78 overall. As a junior in 2015, he ran 346 times for 2,558 yards (7.4 yards/carry) and 31 TDs. Ole Miss has 86% of the Crystal Ball votes so far. He attends the alma mater of former Michigan offensive lineman Blake Bars, so Michigan has a bit of history recruiting the school; the former coaching staff also went after younger brother Alex Bars in the 2014 class.

Lakeland (FL) Lakeland running back Anthony “A.J.” Davis was offered by Michigan. He’s another 5’11”, 190-pounder who has offers from Auburn, Clemson, Florida, Florida State, LSU, Miami, and Ohio State, among others. He’s a 247 Composite 4-star, the #8 running back, and #115 overall. He’s very quick and changes direction extremely well.

Hit the jump for a few more offers and some random bits.

END_OF_DOCUMENT_TOKEN_TO_BE_REPLACED