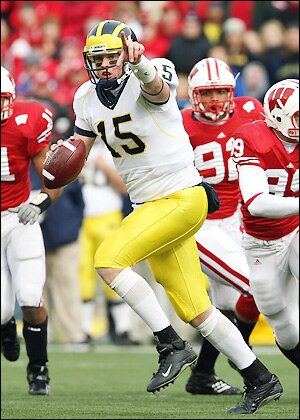 Here’s a wrap-up of the 2007 signees who left Michigan before their eligibility was completed.

Zion Babb – Wide receiver/cornerback – Alhambra (CA) Alhambra
Babb committed to the Wolverines as a speed-burning wide receiver, but bounced back and forth between receiver and cornerback in his two years at Michigan.  He redshirted as a freshman in 2007.  As a receiver in 2008 during Rich Rodriguez’s first year, Babb caught 2 passes for 45 yards.  However, there were multiple behavior and attitude issues – including reported verbal altercations with coaches on the practice field – that forced the program to part ways with him.  He attended a junior college in 2009 and was reportedly considering transfers to Colorado and New Mexico, but did not appear on either team’s 2010 roster.
Current status: Out of football

Artis Chambers – Safety/linebacker – Fort Wayne (IN) Snider
Chambers committed to the Wolverines as part of a seemingly excellent defensive back haul in 2007, joining Jerimy Finch and Donovan Warren.  Chambers played immediately, making 7 tackles as a freshman in 2007.  He added 4 tackles in 2008 while playing a linebacker/safety hybrid role, but left the team prior to the end of the season.  After the 2008 season, he announced a transfer to Ball State and sat out the 2009 campaign.  He was not on Ball State’s 2010 but popped up at Delta State in 2012, where he played in seven games and made 6 tackles.
Current status: Out of football

Hit the jump for several more decommits and transfers.