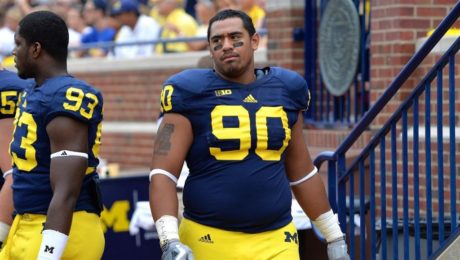 Bryan Mone (image via The Majors)

Mone earned a ton of hype last off-season after a mediocre freshman season in 2014. He made 9 tackles, 1.5 tackles for loss, and 1 fumble recovery as a true freshman. Naturally, the highly rated recruit was thought to be more valuable than the walk-on redshirt junior Ryan Glasgow, and the coaches did indeed say that when they ranked all their players, Mone was the #3 guy on the whole team. Maybe Glasgow was #1 or #2, but that seems unlikely. I don’t know why the coaches would lie, but I certainly didn’t think Mone was the third-best guy on the team. Either way, it didn’t matter because Mone broke his leg not long into August practices, and 325-pounders don’t recover quickly from broken legs. The Wolverines started Glasgow (who also eventually got hurt) and counted on the undersized Maurice Hurst, Jr. at times, along with other, uh, less qualified players. The run defense did okay for a while, but once Glasgow got injured, Indiana and Ohio State ran all over the place.

This year it sounds like Mone will once again be the #2 nose tackle. It might seem like a reach to rank the backup nose tackle at #15 in the countdown, but I’m a little nervous that Glasgow’s pectoral injury will linger. It’s also just tough to stay healthy on the interior defensive line, with guys hurting shoulders, getting rolled up on, etc. Michigan will rotate a lot of guys on the defense line, and the toughest teams to beat on the schedule are Michigan State and Ohio State, both of whom employ power running games. The Wolverines will need Glasgow and Mone to beat those teams, so he’s an important cog in the defense. I also like the fact that he has dropped about 15 lbs. since last season. When he came out of high school, I mentioned that he moved a lot better at a lighter weight and I was concerned with the extra pounds he added as a senior. By no means is he a lightweight at 310, but he should be moving better and playing with more energy at his new weight. I have seen speculation that he could earn himself a spot in the 2017 NFL Draft, but it’s more likely that he positions himself for a big-time role in 2017 and perhaps some notoriety heading into the 2018 draft.