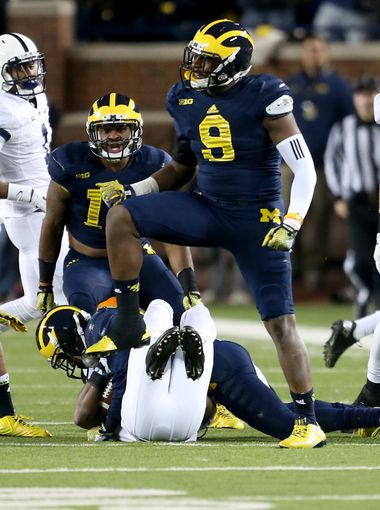 Name: Mike McCray II
Height: 6’4″
Weight: 248 lbs.
High school: Trotwood (OH) Trotwood-Madison
Position: Linebacker
Class: Redshirt junior
Jersey number: #8
Last year: I ranked McCray #32 and said he would be a backup linebacker and special teamer (LINK). He did not play at all due to injury.

Going into his fourth year, Michigan’s presumed starter at WILL linebacker has only played in eleven football games during his career. He redshirted in 2013, played some in 2014, and then missed all of 2015. His most noteworthy moment so far in a limited career was when he blocked a punt against Appalachian State in 2014, allowing fellow inside linebacker Ben Gedeon to return it for a touchdown. Last year a recurring shoulder injury held him out for the year, and Michigan’s linebacker play was questionable. It’s not clear whether he would have been a step up, but he would have at least provided competition.

Now there isn’t a ton of competition. Four senior linebackers departed, and the starting linebackers are the only linebackers who have ever stepped on the field in college. With Gedeon starting in the middle and Jabrill Peppers starting at SAM, that’s a pretty experienced duo. McCray, on the other hand, played mostly on special teams when he did see the field. He has bulked up to nearly 248 lbs. to handle the run-stuffing duties on the inside, while Michigan recruited a shorter, quicker backup for the WILL spot in Devin Bush, Jr. I expect Bush to spell McCray at times, and McCray would probably slide over to MIKE if anything were to happen to Gedeon. McCray did a nice job of tackling and stuffing the run in the spring, and he was decent in pass coverage coming out of high school a few years ago. Hopefully, he can stay healthy and be a pleasant surprise for the Wolverines in 2016.