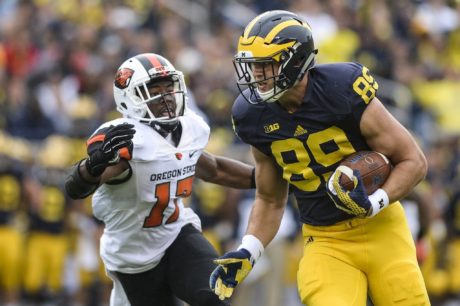 Michigan used a variety of tight ends, including some position-switchers, in 2015. Bunting was the guy who seems to exist every year, a guy who’s a wide receiver with questionable blocking ability that needs to bulk up. At 6’7″ and 243 lbs., we all knew he was too light to be a major contributor. He was last year’s Zach Gentry. That didn’t stop Bunting from playing some and showing himself as a very possible replacement for Jake Butt down the road. He averaged a respectable 14.4 yards/catch, including some nice catch-and-runs against Oregon State and Florida.

Blocking tight end A.J. Williams graduated, but Bunting isn’t the guy to replace him. That will probably be Tyrone Wheatley, Jr. Instead, Bunting has one more year to play the apprentice role behind the possible All-American in Butt. I would normally put the backup to a star tight end a little bit higher, but Michigan has so much competition at the position that I can’t convince myself to put him higher than #40. I don’t see a big reason for his number of targets to increase significantly, but adding 9 lbs. since last season improves his viability. I see him catching around 10 balls with a slight uptick in snaps.