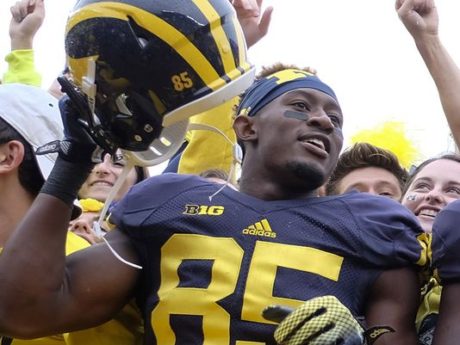 Just for some perspective, I counted approximately 50-55 players in the 2015 Season Countdown who ended up having a noteworthy impact on the team. That gives you roughly a two-deep on both sides of the ball, plus some special teamers and other rotation guys. So as we hit #50 with Maurice Ways, this is entering the territory where we should be talking about guys who will see significant snaps, not just in garbage time or an occasional special teams snap.

I thought Ways would take a step forward as a redshirt freshman last season, and he did to an extent. Michigan used the starting wide receivers and a bevy of tight ends in the passing game, so there weren’t a lot of receptions to go around for backup receivers. In fact, only 12 receptions were recorded by wide receivers not named Jehu Chesson, Amara Darboh, and Grant Perry. Drake Harris had 6, Ways had 3, and the other 3 went to guys who are no longer on the roster (Da’Mario Jones, Freddy Canteen, and Brian Cole). The thing that got Ways on the field was his ability to block, as he was considered to be the most effective blocker of the backup crew.

Michigan should have even more talent at the tight end spots this year, and the top three wideouts return. There’s no real reason to expect Ways’s role to increase, especially considering the fact that he broke his foot during the spring and wound up having surgery. He is expected to be healthy by the beginning of the season, but whether he’s back to full strength or not is a slightly different subject. I think he can carve out a role once again as a blocking receiver, because he has the best size of any receiver on the team at 6’3″, 210 lbs. But if he’s going to make an impact in the passing game, it probably won’t be until 2017, once Darboh and Chesson have moved on to the NFL.