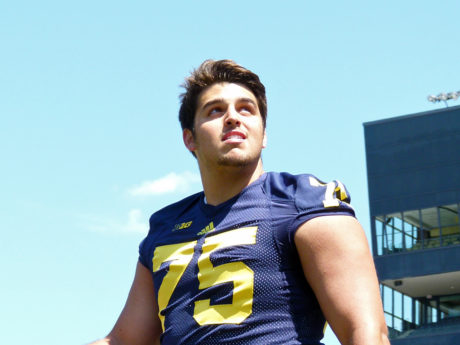 Runyan was a little bit undersized when he entered college last year at 276 lbs., and he redshirted as expected. Michigan didn’t need a lot of help at offensive guard because Ben Braden and Kyle Kalis stayed healthy, and David Dawson was the first guy in at guard when someone was needed. That extra time was needed, but Runyan added weight pretty quickly. According to the spring roster, he added 28 lbs. since last year. When we saw him in the spring, he was winning sprints in the lineman group, and he held his own during the scrimmages against some pretty good defensive linemen. Runyan might end up playing some center by the time his career is finished, but for now, he appears to be the #4 guard behind Braden, Kalis, and Dawson. If that’s the case, he probably won’t be called upon for a heavy workload this year, but the coaches could get him some playing time to groom him for 2017 when there will be two open jobs at guard.