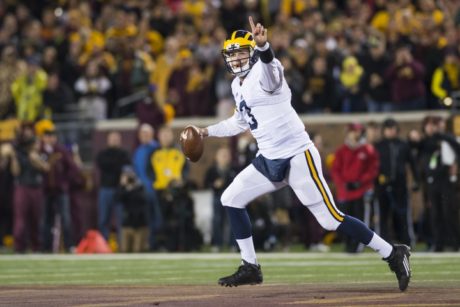 Michigan’s quarterback situation was rather confounding, especially in the spring of 2015. Let us consider the following:

The in-season depth chart (Rudock-Speight-Morris-Malzone) looked totally different than the spring one (Malzone-Morris-Speight), and it might not be a good sign for a couple of those guys that they had a head start and still got passed by Speight. Even his 2015 season was mostly uninspiring, with just one decent drive to his credit. That drive ended in a game-winning touchdown throw to Jehu Chesson against Minnesota, but Jake Rudock – who was injured – returned the next week, and Speight went back to standing on the sideline until he mopped up against Ohio State in dreadful fashion (6/14, 44 yards, 1 INT).

Hit the jump for more on Speight.

Then the off-season came, and naturally, the hype was in favor of the hotshot transfer from Houston, John O’Korn. He was reportedly “the best quarterback on the roster” last year, and that included Rudock. He’s still the most experienced QB on the team, with roughly 1.5 years of starts under his belt. In the spring he looked more mobile and had a stronger arm.

But now reports and vibes are trickling out that Speight will be the starting quarterback. In the spring I was behind O’Korn, but more recently, my feelings were made pretty clear about how things were shaking out when I ranked O’Korn #22 in the countdown over a week ago. I think Speight is going to be the guy to start the year.

Speight played pretty well in the spring game. He checked the ball down and found the open guy, used All-American tight end Jake Butt, and showed more mobility than most would expect out of a 6’6″, 243 lb. quarterback. What I have yet to see him do is hit a deep ball in practice or in a game, so that concerns me. Michigan has at least one deep threat in Jehu Chesson, and more could be waiting in the wings with the likes of Eddie McDoom, Kekoa Crawford, Drake Harris, Nate Johnson, etc. Whoever trots out onto the field for the opener against Hawaii is the guy Jim Harbaugh is trying to hitch his wagon to through at least 2017. Speight performed well against half of a starting defense in front of a smattering of fans in the spring, but can he do it against a full defense of starters in front of 110,000?

Ultimately, I trust Jim Harbaugh when it comes to quarterbacks. He turned Josh Johnson into a draft pick at San Diego, he developed Andrew Luck at Stanford, he resurrected the career of Alex Smith in San Francisco, and he turned Colin Kaepernick into at least a temporary star once Smith left. And oh yeah, last year Harbaugh took an Iowa (Iowa!) castoff, had him completing 64% of his passes, turned him into one of the top couple quarterbacks in the league, and got him drafted in the 6th round. I don’t love Speight’s abilities, but the smart bet is in favor of whomever Harbaugh puts out there.