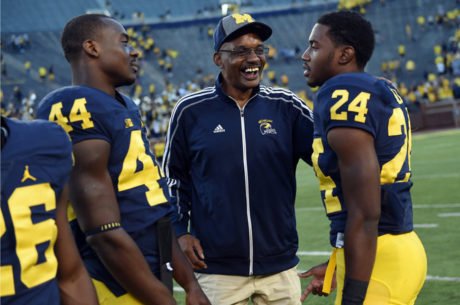 Hill was a very slight cornerback coming out of high school, so it was questionable whether he would play in 2016 or not. With three very good corners on the roster, how many redshirts would be worth burning? The answer: All of them. Of course, all three of those top corners were seniors, so the staff naturally wanted to develop guys to replace them. Hill was one of those guys. Early in the season, he was reportedly running behind David Long, Jr. to play, but an injury to Long pushed Hill to the forefront of that 2016 corner class. He ended up being the fourth (or fifth) cornerback behind Jourdan Lewis, Channing Stribling, Brandon Watson, and Jabrill Peppers (depending on your view of Peppers’s position).

This spring Michigan’s coaching staff suggested that Hill might be the most talented cornerback on the roster. Those are strong words, considering the presence of David Long and Ambry Thomas, among others. However, a constant theme with Hill has been “toughness” or perhaps a lack of it. The coaches publicly and gently suggested that Hill (and Long) needed to learn how tough the college game is and how to play through bumps and bruises, but I think we can be assured that such a sentiment was shared more strongly behind closed doors. Hill has the quickness to be a solid field corner and has some similarities to Jourdan Lewis, but there’s not a whole lot of experienced depth at cornerback. Normally, a fourth or fifth (or sixth if you go back to pre-Clark) corner won’t jump to #17 on the countdown, but the huge loss of talent at the position pushes Hill and a couple of these other guys into the top 20.