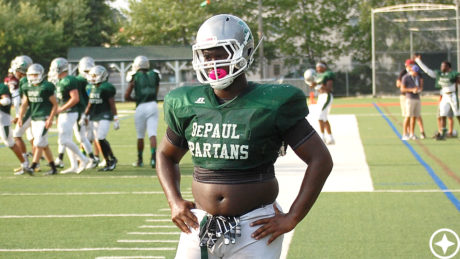 Dwumfour entered college in 2016 looking like he needed to reshape his body a little bit and add some weight. He was listed at 286 lbs., which is on the lighter side for a defensive tackle, but he was a little soft in the middle. The coaching staff liked him enough to play him early, but he didn’t see any time beyond the Penn State game in late September.

Now Dwumfour has shot up the charts – at least the countdown chart – because of the dearth of defensive tackles. Starters Maurice Hurst, Jr. and Bryan Mone look to be solid to very good, but after that, Michigan is counting on Dwumfour and freshman Aubrey Solomon, among others, to contribute. Dwumfour missed a big chunk of the spring with shoulder problems, enough that the coaching staff bumped weakside end Ron Johnson all the way down to 3-tech. Johnson is back to playing end, but the Wolverines need Dwumfour healthy to eat some snaps at a physically demanding position. He has earned some hype for his performance when healthy, but as the undersized Hurst’s primary backup, Michigan could have some serious depth issues if they start to get dinged up inside.