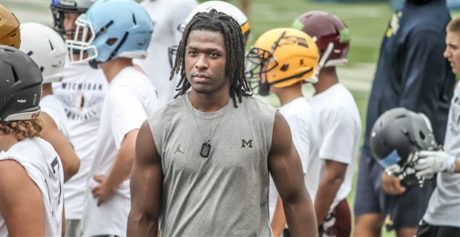 Vilain grew up in Canada, but a couple years before graduation, his name started to pop up on Michigan’s radar. He was attending camps in the midwest and eventually ended up in Alexandria, VA, to finish out the final two years of his high school career. That was probably a good choice, because offers started rolling in. Penn State, Rutgers, and North Carolina all took runs at him at various times, but perhaps that early familiarity with border state Michigan helped out in the end. He became an Under Armour All-American and powered his way up to #56 overall in the 247 Composite rankings, including #36 overall to 247 itself.

Vilain joins a team with no established backup at weakside end. Taco Charlton graduated, and his backup, Chase Winovich, will step into the starting role. Everyone else is almost totally inexperienced, and one bullet in the chamber was ejected when Corey Malone-Hatcher retired due to medical reasons. Donovan Jeter worked there in the spring, but he’s more of a strongside end or even a 3-tech in the long term. Other options include redshirt freshman Ron Johnson, redshirt sophomore Mike Jones, sophomore Carlo Kemp, and freshman Kwity Paye, along with redshirt junior linebacker Noah Furbush, who has been rumored to be getting a chance to put his hand down. There’s some talent in there, but no one looked ready to step up and be an impact player in the spring. Paye and Vilain just arrived this summer, so we haven’t seen them in college pads yet, but the coaching staff is reportedly pleased with how Vilain has looked since hitting campus. I think he will play a fair amount this season and eventually lock down the backup WDE spot.