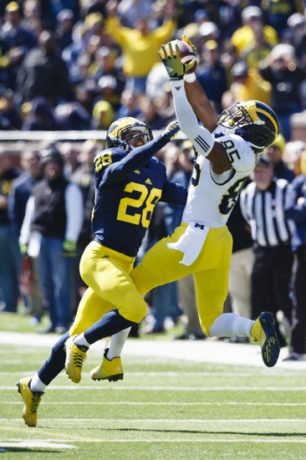 Watson has so far been strictly a backup cornerback, and no higher than fourth on the depth chart during his career. He has had a chance to take an open spot the past couple seasons, but he has not taken advantage of those opportunities. In two years of playing time, he has yet to make a play on the ball (no FF, FR, INT, or PBU); however, he made a great interception in the 2015 spring game, and he made a pick-six in this year’s spring game. While not very tall, he has long arms and plays receivers physically. He just lacks the quickness and speed to be an important cog in the defense. In addition to the pick-six, he also got outrun by Ty Isaac for a touchdown in the spring game.

Despite the uncertainty at the cornerback positions going into 2017, Watson isn’t thought to be a contender to start. He will almost certainly play a good deal as a nickel corner or backup safety. Lavert Hill, David Long, and Keith Washington look to be ahead of him, and Benjamin St-Juste (outside corner) and Ambry Thomas (slot corner) have a chance to pass him. Watson has value as a veteran presence, but his lack of athleticism makes him a liability against better passing offenses.